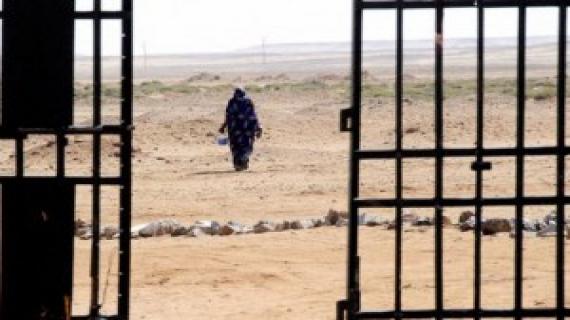 Lghalia and Fouila Lahzam are two Moroccan sisters who have come to add to the hundreds of citizens who were able to escape the shameful camps of Tindouf and rally the mother country, thus unveiling the tragic and difficult conditions in which Polisario-restrained population is living, children and women in particular.

Lghalia arrived in Dakhla in company of her sister and their children within the framework of the second phase of the domestic visits exchange program supervised by the High Commission for the Refugees. They thus spontaneously decided to settle definitely in Morocco after having informed the HCR representatives of this move.

This stroke of bad luck inflicted on these two sisters who for years underwent the atrocities of the Polisario mercenaries ought to remind the whole world of the reality of the shameful camps of Tindouf, where thousand of Moroccans, detained against their will for the last three decades, are suffering acts of violence at the hands of their jailers.

As everybody knows, since Morocco distinctly expressed its will to recover its sovereignty over its southern provinces, Polisario separatists undertook a campaign intended to restrain Moroccan citizens to deport them in the camps of Lahmada and Tindouf for the purpose of exploiting them for their mendacious campaigns.

Passed over in silence for a long time, these crimes against humanity have begun to be unveiled a few years ago thanks to the reports of numerous Saharan and foreign NGO's, as well as to the efforts of those retrained who, though victims of a blockade imposed on them for many years, were able to finally reach the mother country and inform the world of what is really taking place in those shameful camps.

These efforts have finally unveiled one of the most tragic deceptions of modern times, namely the Polisario. Henceforth, the whole world is aware of the separatists' practices and wild repression means they are using against the elderly, women and children, without  forgetting others sufferings such as domestic braking-up, separation and disintegration. Polisario base manoeuvres made these camps real ghettos and extermination sites. These vile acts are carried out at the same time as the embezzlement of food and humanitarian aid that are intended  for the restrained by the mercenaries' leaders in their shameful intent to grow richer at the expense of their prisoners. Children are not spared in this criminal process.

For years, the mercenaries deported thousands of people among the restrained to Cuba where they were exposed to indoctrination and military instruction in order to make them future terrorists and take them hostages in order to prevent their families from leaving the camps of Tindouf. They are also used to propagandist ends by the Polisario leaders who take advantage of the good faith of the Spanish families that shelter them during summer vacations. In a blatant violation of the rules of humanitarian international law, the polisario separatists maintain in detention the Moroccan prisoners of war who should have been freed since the cease-fire came into force in 1991, thus spurning the calls made by various personalities and international entities worldwide.

The Moroccan restrained remaining in captivity, about 500, are still undergoing the cruellest tortures and various forms of intimidation and blackmail. These practices, described as war  crimes, have been denounced by numerous international bodies and NGO's; these have condemned the Polisario intransigence and decided to make 2004 the year of mobilization for the unconditional liberation of all Moroccan prisoners. To give an example, one of these NGO's, France Libertés, has recently decided to stop aid in favour of the restrained of Tindouf, "conscious to have indirectly participated in the use of an illegal,  slave labour" composed of Moroccan restrained individuals.

In a report published following an international investigation mission conducted during the period 11-25 April 2003 on the Moroccan prisoners' detention conditions, the Foundation  recommends to institutional financial backers (EU, WFP and NGO's) to inquire into the serious facts of embezzlement of food aid intended for the Polisario-restrained people. The Foundation,  which is headed by Danielle Mitterrand, the wife of the late ex French President François Mitterrand, and supported a great many projects in aid of the restrained of Tindouf, considers it is "today impossible to continue to intervene" in these camps "where Moroccan prisoners' hard labour has been practised for the last 28 years".

The France Libertés report describes in detail the murders, summary executions, tortures, physical mutilations and medical experiences inflicted on the prisoners as well as the abuses and inhuman life conditions to which are exposed the Moroccan restrained. At least 121 people would have died of violent death in the camps of Tindouf, where interrogations, summary executions and hard labour are the common fate of the prisoners. Practically all prisoners have been tortured following their capture, stresses the report. The France Libertés report, as well as those of other NGO's, demonstrate once again that we are there facing a gang of criminals and outlaws who pose a threat to peace and stability in the region. It is high time that the international community becomes aware of this danger and acts accordingly to put an end to it.