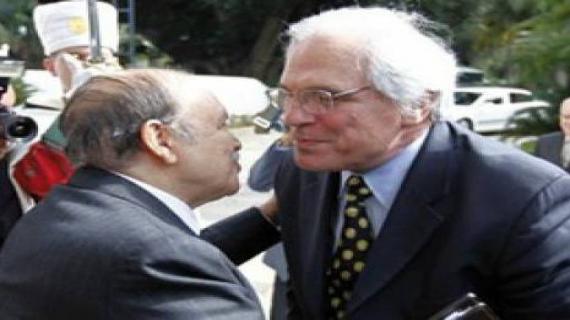 As long as Mr. Ross evades redefining the Western Sahara conflict as a battle of wills between Morocco and Algeria over political dominance in North Africa, his mission to resolve the thirty-seven years old dispute will remain at a standstill. If the U.N. envoy for Western Sahara‘s mission is clear, his plan of action is unknown.

Since finding “an acceptable and mutual agreeable solution” is a major tenet of the U.N. efforts to resolve the Western Sahara, it is hard for Moroccans to envision a successful “Ross mission”.

Given the unwillingness of the United Nations Security Council to impose a resolution on either party of the conflict, Morocco may be “forced” to entertain Ross, but not compelled to concur with his findings. Rabat’s diplomatic and security efforts should continue to focus on the Sahel assisting Franco-African forces secure the region, on Ceuta maintaining a mutually respectful diplomacy with Spain and on London furthering the Moroccan-British relations.

Moroccan pessimism is the product of years of U.N. diplomatic failures in the region. Twenty-one years after the establishment of the United Nations Mission for the Referendum in Western Sahara (MINURSO), the points of contention between the separatist Polisario Front, an Algerian proxy, and Morocco remain unchanged and unresolved. If Mr. Ross is resolute about ending this cruel conflict, he must confront and expose the unpleasant political realities lurking behind the diplomatic handshakes, endless negotiations and continuous visits to the region.

Now that Mr. Ross is back in the region, despite Moroccan reservation over his partiality, a review of the U.N. mission for the Western Sahara is in order. Despite Morocco’s inability to articulate, at times, the shortcoming of the MUNIRSSO, Mr. Ross should address Algeria’s maneuvers that have been hampering UN efforts and reconsider claims that the Polisario is the sole representative of Sahrawis.

It is too simplistic to dismiss Morocco’s efforts to expose the extent of Algerian influence over the U.N. negation as mere Moroccan propaganda. In fact, it will be an insult to Moroccans, if Mr. Ross truly trusts that Mr. Abdelazziz, the Polisario chief, is free to make decisions during the U.N sponsored negotiations. In dealing with the U.N., the Polisario leadership receives clear, concise and explicit instructions from its handlers in Algerian intelligence. As a former Ambassador to Algeria, Mr. Ross is familiar with the working of Algerian intelligence in running the Western Sahara dossier.

If Mr. Ross is back in the region "to look ahead and to see how to modify, improve or change the style of the negotiations process”, then including Algeria, and not the Polisario, as opposing party at the negotiation table may achieve the U.N. envoy’s goal.

Moroccans realize and recognize the existence of a genuine Sahrawi movement that campaign for an independent entity in the Western Sahara. In fact, Mr. Ross met with a group of them during his recent visit to Laayoune. The existence of Sahrawi Activists living in the Moroccan Sahara cast serious misgivings about Algerian claims that the Polisario is the sole and legitimate representative of Sahrawi people. The “separatists of the interior” should continue to organize and articulate their position as long as they remain independent and free from Polisario infiltrators.

If Mr. Ross had a chance to hear both views on the conflict during his stop in Morocco, the U.N. envoy did not meet anti-Polisario activists in Tindouf. Algerian officials curbed Mr. Ross meetings that were limited to pro-Algeria Polisario leaders. However, he met with Mahjoub Salek, the general coordinator of the Polisario dissident movement Khat Achahid. Mr. Salek used the meeting to underscore the importance of including other Sahrawi groups like Khat Achahid, along the Algeria sponsored Polisario, in future negotiations with Morocco.

Ross’s critics in Morocco contend that the U.N. diplomat is biased and deaf to Moroccan calls for a more aggressive UN approach in exposing Algeria’s influence over the progress of the negotiations. Notwithstanding Moroccan diplomatic missteps, the former U.S. diplomat recognize Algeria’s clear intention to keep Morocco stuck in the Western Sahara quagmire as part of a grand scheme to weaken Morocco militarily and diplomatically.

Contrary to what the Algerian media proclaims, Morocco is not opposed to holding a referendum over the final status of the Western Sahara. Nevertheless, given the unresolved disagreement over electoral lists and voters eligibility, Mr. Ross, as did his predecessor, realizes the near impossibility of holding a referendum in the disputed territory. For this reason, the Kingdom, with the backing of influential world capitals, has been advancing Morocco’s Local Autonomy Plan for the Sahara as the only realistic and viable solution to the conflict.