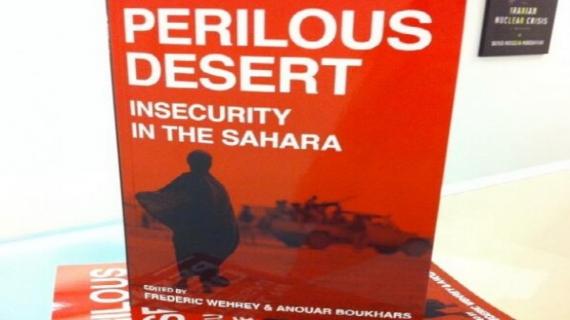 A new book published by the Carnegie Endowment says Al-Qaeda “has found an attractive base of supporters and recruits” in the Sahara/Sahel, echoing a May 13 UN Security Council warning that an “Arc of Instability” across the region could become a launch pad for international terrorist attacks.

“The geopolitical significance of the Sahara is becoming painfully clear,” according to a new book, Perilous Desert: Insecurity in the Sahara, published by the Carnegie Endowment for International Peace and edited by North Africa experts Frederic Wehrey and Anouar Boukhars.

The book formally launched on Wednesday at an all-day conference of experts, warns of increasing inroads by al-Qaeda in the Islamic Maghreb (AQIM) and its allies in terrorism and trafficking across the Sahara/Sahel region, including in Libya, Mali, Mauritania, and the Polisario-run refugee camps near Tindouf in Algeria, which represent “a tinderbox waiting to explode.”

According to Perilous Desert, “while the world’s attention was fixed on the momentous events in Tunisia, Egypt, and Libya after the outbreak of the Arab Spring, the desert states to the south were undergoing their own transformations with major global implications.” Although “long overlooked by policymakers and scholars,” the “states of the Sahara suffer from a ‘perfect storm’ of afflictions — weak governance, rampant corruption, endemic poverty, ethnic and societal cleavages, and inaccessible terrain — that give room for transnational crime and Islamist militant groups to proliferate and flourish.”

The recent “series of high-profile events,” including the murder of a US Ambassador in Libya, French intervention after the al-Qaeda-backed conquest of N. Mali, and hostage seizure and shootout at the Algerian gas facility, “point to a new front in the struggle against al-Qaeda — what some have called ‘an arc of instability’ stretching from Western Sahara to Somalia and north into the Sinai.”

Al-Qaeda’s North Africa affiliate “has found an attractive base of supporters and recruits among the region’s disenchanted,” in Mali, Libya, Niger, Mauritania, and Algeria, including frustrated fighters and youth in the refugee camps controlled by the Polisario Front.

Perilous Desert provides an “in-depth analysis of the factors shaping the Sahara” — with chapters on Libya, Mali and Algeria, Mauritania, organized crime in the Sahel, and the Western Sahara conflict — all of which contribute to increased instability and insecurity that “raises urgent concerns for the broader Sahara and the West.”

In a chapter on the Western Sahara, Carnegie scholar Anouar Boukhars writes that the unresolved W. Sahara conflict has “negatively impacted trans-Saharan security. The under-governed areas abutting the Western Sahara, especially northern Mauritania and the Polisario-administered camps in southwest Algeria, are becoming major hubs for drug trafficking, the smuggling of contraband, and the circulation of weapons.” Boukhars notes that “there is growing evidence to suggest dangerous connections between criminal organizations, AQIM, and the Sahrawi refugees in Tindouf,” and that “in February 2013, the Malian foreign minister confirmed the presence of Sahrawi combatants from the Tindouf camps among the groups that fled the French-led intervention, which was launched to counter an advance of insurgents from northern Mali toward the capital.”

Boukhars adds: “a study conducted by Altadis (a European tobacco company) revealed that ‘Sahrawis are involved in a vast network of smuggling … using various routes, passing through the W. Sahara to Algeria via Tifariti and Bir Lahlou, oases controlled by the Polisario Front.” While “this illegal activity has existed for decades,” the problem today is “these illicit activities occur in the context of the expansion of AQIM, growing interdependence of organized criminal networks and state officials, and rising social and ethnic conflict.”

In the book’s conclusion, Boukhars and Carnegie senior associate Frederic Wehrey write that “fragile and failing states pose real threats to international security. They can provide training bases and safe havens for al-Qaeda and its affiliates as well as offer violent extremists an environment suited for generating large profits from smuggling and illicit trafficking.” They note that, across the region, “past approaches have focused on building the capacity of the security sector.” To successfully counter the threat from al-Qaeda and allied militant extremists and transnational criminal networks in the Sahara, they offer a series of policy recommendations for how the international community can work closely with local states to institute and continue reforms that also address “the underlying institutional and social roots of insecurity.”

In late February the Inter-University Center for Terrorism Studies, IUCTS, issued another study, which reported that al-Qaeda was establishing a new hub in the Sahara/Sahel for jihadi recruits and a potential launching pad for terrorist attacks much closer to US and European shores. Among other recommendations, the IUCTS study called for long-term solutions to reduce potential criminal and terrorist recruiting in the Polisario-run refugee camps in Algeria.