“The Identity of a Front,” an Upsetting Movie for Algiers, Tindouf 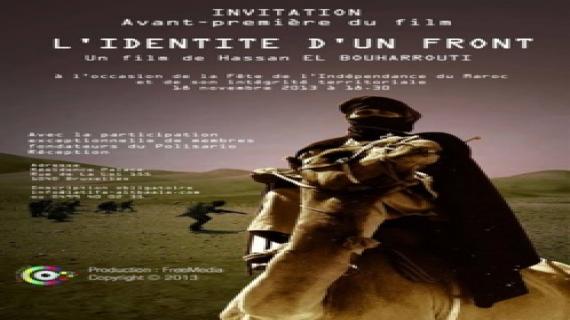 Algiers authorities and the Polisario leaders are racing against the clock to prevent the screening in Belgium of “The Identity of a Front,” a movie that removes the veil on their allegations regarding the Western Sahara issue.

The Algerian regime and the Polisario already failed some time ago in another attempt to dissuade two Australian filmmakers, Violeta Ayala and Dan Fallshaw, to show their documentary “Stolen.” The documentary film is about slavery that is still practiced in the Sahrawi refugee camps in Tindouf, southwestern Algeria.

“The Identity of a Front” is a 90-minute documentary film, directed by Hassan El Bouharrouti. It will be shown in a première in Brussels, on the occasion of the celebration of Morocco’s Independence Day.

The film surveys the history of the Sahrawi separatist movement, the Polisario, since its creation in 1973 and how it has been utilized by the Algerian and Libyan regimes. The film sheds light on the geopolitical and geo-strategic situation that was prevailing at the time to explain the essence, ideology, and practices of the Polisario.

The filmmaker El Bouharrouti supports his documentary with archival footage of the French National Audiovisual Institute (INA) and with testimonies by some founding members of the Polisario who admit the clear-cut involvement of Algeria in the Sahara conflict.

These testimonies clearly show that the Polisario, initially created by Sahrawi students to fight the Spanish occupation of the Moroccan Sahara, was clawed back by Algeria which diverted it from its initial purpose in an attempt to weaken Morocco and serve its hegemonic aims in the region.

The film exposes the lies conveyed by the Polisario leaders and also sheds light on their excesses and abuses against the populations sequestered in the Tindouf camps for nearly four decades.

The film director seeks to inform the international public opinion about the ins and outs of the Western Sahara conflict and inform younger generations about the origin and actual circumstances that triggered this artificial territorial dispute.