“We are defenders of Moroccan territorial integrity:” Heads of Sahrawi tribes 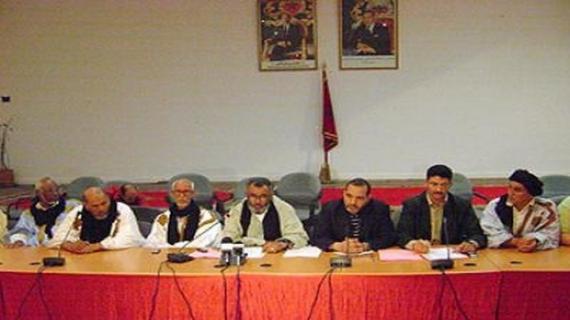 The Sheikhs of Sahrawi tribes held an urgent meeting in Laayoune last Sunday on how to react to the dangerous rumors that have been spread recently by some national newspapers and online news websites, which aim to pour oil on the fire of instability and to break the unity of the sheikhs and their work with the local authorities represented by the governor of Laayoune, Mr. El Khalil Dekhil.

He added, “we must stay vigilant and pay attention, as national journalists, before we write on issues concerning our national symbols and the unity of our country because there are enemies who want us to be weak, unstable and divided and to ruin all the efforts done by the kingdom, the local authorities and the sheikhs of the southern provinces.”

More then 44 sheikhs of all tribes of the Sahara who attended the meeting signed a statement and a declaration where they deny having any problem with Mr. El khalil Dekhil, the Wali and the governor of Layoune Boujodour. “The governor is a nationalist, experienced and competent son of the Sahara who has received the trust of his Majesty and we, as the sheikhs of the Sahrawi tribes, work side by side and hand in hand with Mr. Edkhil as a representative of His Majesty the king in this region at all levels with interchangeable respect and appreciation so as to improve the level of the regions ‘inhabitants in all fields of life under  the High patronage of his Majesty Mohamed VI” says the statement.

The sheikhs concluded their statement by reminding both national and international public opinion, “All the tribes of the Sahara and their sheikhs are defenders of the territorial unity of the Kingdom of Morocco”.

“We should all keep in mind that our national cause is above any personal goals when we write about the issue of the Sahara and we should contact the people concerned before we write because we are in a moment of building and establishing our national unity and integrity,” commented Mr. El Idrissi Sidi Abdi.