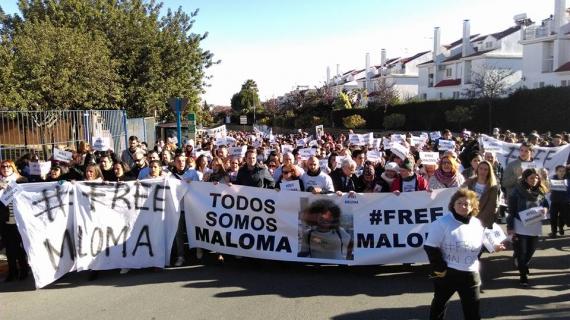 Spanish NGO “Freedom is Their Right” has condemned the systematic violations committed by the Algeria-backed Polisario militia of the rights of the Sahrawi women sequestered in the Tindouf camps, southern Algeria.

Speaking at a meeting held over the weekend in Northern Italy on behalf of the NGO, Elisa Pavon Mulero said: “we denounce the violations committed by the polisario in the Tindouf camps against several young Sahrawi women”.

Over fifty Sahrawi girls, who left Tindouf camps seeking better future and who spent several years in Spain with their adoptive families, are being sequestered in the camps after they visited their biological parents, added Mrs. Mulero.

These young women are married against their own will, suffer all forms of physical and psychological abuse and are forced to work as domestic servants in flagrant violation of their most basic rights, she stressed, calling the international community to intervene to put an end to their ordeal.

Mulero also recalled the complaint filed against the Polisario in 2017 at UN Human Rights Council in addition to the meetings held with members of the European Parliament on the sufferings endured by the Sahrawi women sequestered by the Polisario mercenaries, who are armed, funded and sheltered by the Algerian regime.

“Freedom is Their right” is an NGO representing the host families and adoptive families in Spain of fifty girls sequestered by the Polisario separatist group.

In June, a European parliamentary committee held a hearing on the dire and inhumane situation suffered by these Sahrawi women.

During the debate, some MEPs called on the European Commission to exert pressure on Algeria to ensure the respect of the fundamental rights of the Tindouf camps inhabitants, including freedom of movement.

The MEPs said they were shocked and outraged by the horrifying testimonies of forced marriages, kidnapping, ill-treatment and torture of Sahrawi girls. They called for urgent actions to end the tragedy and the unbearable situation of these Sahrawi girls, several of whom having a Spanish nationality.