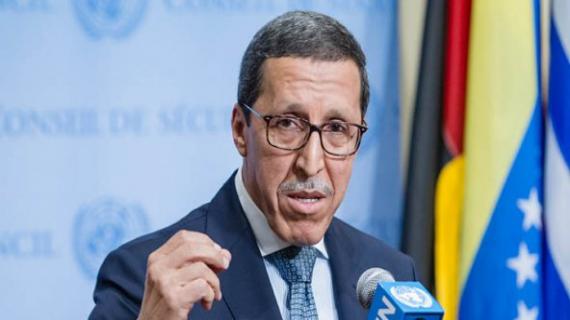 Morocco's Permanent Representative to the United Nations, ambassador Omar Hilale, said, on Wednesday before the UN 4th Committee, that the process of decolonization of the Southern Provinces was indeed completed in 1975 and that the decolonization of the Moroccan Sahara was carried out in accordance with international law.

"As we all know, international law is the emanation of international positive law, which is based on three foundations: universal or United Nations principles, treaties and custom," stressed ambassador Hilale, who was speaking at the end of the 4th Committee's debates on the Moroccan Sahara issue.

In this regard, Hilale noted that "firstly, Morocco has recovered its southern provinces in accordance with the principles of the United Nations Charter, particularly Article 33 of Chapter VI, which stipulates that the parties to any dispute +shall, first of all, seek a solution + by negotiation" and the resolutions of the General Assembly, which expressly mention Morocco and Spain".

These negotiations, he recalled, led to the gradual recovery of Tarfaya in 1958, then Sidi Ifni in 1969 and finally the Saquia Al Hamra and Oued Eddahab Region in 1975, noting that "it was therefore the negotiation that made it possible to end the Spanish presence in the Sahara".

"Secondly, it is a multilateral instrument that sealed the return of the Sahara to Morocco, namely the 1975 Madrid Agreement. Its legality was confirmed by its submission to the Secretary General of the United Nations, as well as by the General Assembly, which took note of it by its resolution 3458B of 10 December 1975," the Moroccan diplomat added.

"Thirdly, this international legality has also been reinforced by custom, embodied by the Jmaâ, the supreme body of the heads of Sahrawi Tribes, which validated the Madrid Agreement on 26 February 1976," Hilale went on to say.

"It is worth to mention that the International Court of Justice unanimously recognized, in its opinion of 16 October 1975, the existence of allegiance ties, the "Baiya", between the Sultan of Morocco and the tribes living in the Moroccan Sahara. This "Baiya" still exists today. It takes place every year on the occasion of the Throne Day, when representatives from all regions of the Kingdom, including the Sahara, pledge allegiance to HM the King," the ambassador underlined.

Consequently, "the Sahara is no longer a question of decolonization, but of the completion of territorial integrity," Hilale told the Committee.

For all these reasons, Morocco strongly reiterates its urgent call for the Committee and its subsidiary bodies to definitively relinquish the examination of the dispute over the Moroccan Sahara and allow the Security Council to fulfill its mandate in this regard, he insisted.