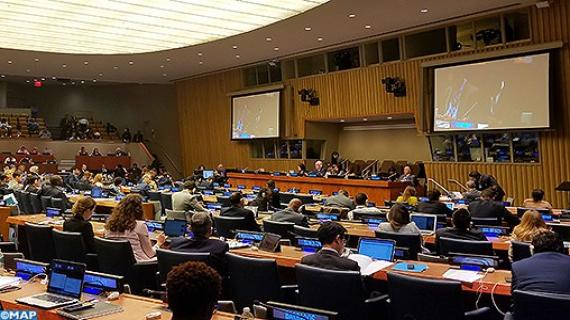 The UN Fourth Committee adopted, Wednesday without a vote, a resolution that reiterates support for the political process initiated by the United Nations for the settlement of the Sahara issue, and calls upon all the parties to cooperate fully with the Secretary-General to achieve a political solution to this regional dispute.

The resolution backs the process based on the resolutions adopted by the Security Council since 2007 in order to achieve a “just, lasting and mutually acceptable political solution” to the Sahara issue.

The text welcomes efforts made in this regard and calls upon all the parties to cooperate fully with the Secretary-General and with each other in order to achieve “a mutually acceptable political solution”.

The Committee also welcomes the commitment of the parties to continue to show political will and work in an atmosphere propitious for dialogue, in order to enter into a more intensive phase of negotiations, in good faith and without preconditions.

noting efforts and developments since 2006, thus ensuring the implementation of Security Council resolutions.

The resolution refers to the Security Council resolutions adopted since 2007, which welcome the relevance of Morocco’s autonomy plan, deemed as a serious and credible initiative.

The text also supports the recommendations of the Security Council resolutions No 2440 and 2468, which underline the need to achieve progress towards a political, realistic, pragmatic, durable and compromise-based solution.

These two resolutions have identified definitely all the participants in the political process, namely Morocco, Algeria, Mauritania and Polisario.