Polisario Puts Racism towards Sub-Saharans on the Record, Talking of “black danger”

The separatist Polisario militias have issued recently a racist statement describing Sub-Saharans in Laayoune in derogatory terms and warning of a “black” invasion of the Canary Islands.

The statement, published by the Polisario henchmen in the Canary Islands, comes after a wave of Sub-Saharan countries opened or are planning to open consular representations in the Sahara as an additional proof of their support to Morocco’s sovereignty over the territory. 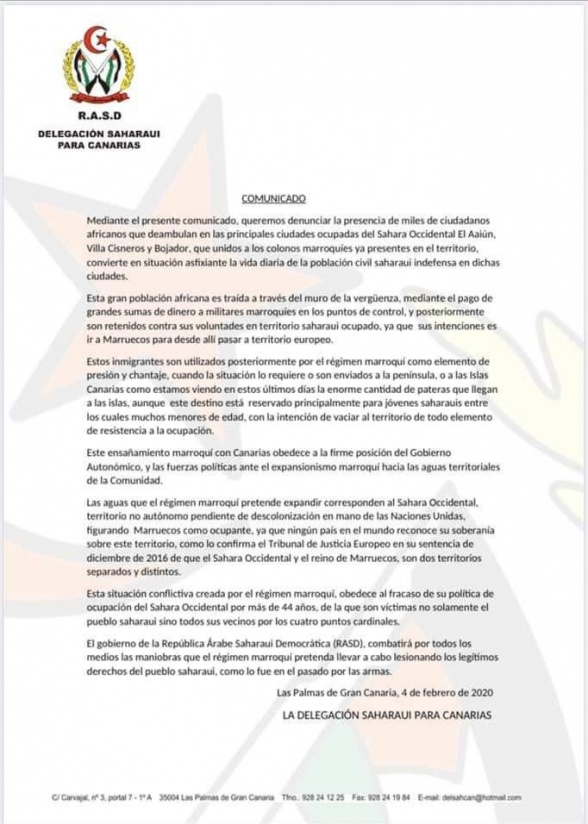 The statement was meant to stir xenophobia and fear among Populist in the Canary Islands by using wordings such as “We denounce the presence of thousands of African nationals in Laayoune” adding that their presence “was asphyxiating the local Sahraouis.”

The Poliario went on in their abject racism to warn the Canary Islands of the advent of a “black danger.”

Surfing on an anti-Moroccan wave backed by populist and far-right movements in Spain after the North African Kingdom decided to demarcate its maritime borders, the Polisario claimed Morocco was bringing Sub-Saharans to Laayoune to “blackmail” Spain on the migration front.

But such claim shatters after a careful look at Morocco’s migration policy. The country has offered legal residency stay for more than 56,000 people and has defended a humanitarian approach to deal with migration beyond the security paradigm.

At the rhetorical and practical level, Morocco has opened its arms to its African brothers. Meanwhile in the camp of Tindouf, Sub-Saharans and black Sahraouis continue to suffer slavery.

In their annual reports on the human rights conditions in the Tindouf camps, international rights watchdogs including Human Rights Watch (HRW), repeatedly condemned the persistence of slavery practices.

“Practices of slavery that centuries ago were a basic feature of traditional nomadic culture in the Western Sahara appear all but nonexistent among the Sahrawi refugees today,” HRW said in its report on Tindouf camps.

“The persistence of certain forms of slavery highlights the need for continuous, on-the-ground human rights monitoring,” it said.

In 2009, two Australian journalists with the Sydney Morning Herald were invited to the camps by the Polisario representative in Australia with the aim to carry out a propaganda coverage in favor of the polisario leadership. While in the camps, the two journalists noticed slavery practices and decided to secretly film a documentary on the ordeal of black people in the camps.

The film, dubbed “Stolen, exposes modern-day slavery in the refugee camps of Tindouf through telling the story of a Sahrawi girl called Fatim Sellami, herself a slave, who was reunited with her mother after 35 years of separation with the help of the United Nations. Yet, how many slaves are still languishing in these camps?