Another call to EU to investigate diversion of humanitarian aid by Algeria, Polisario 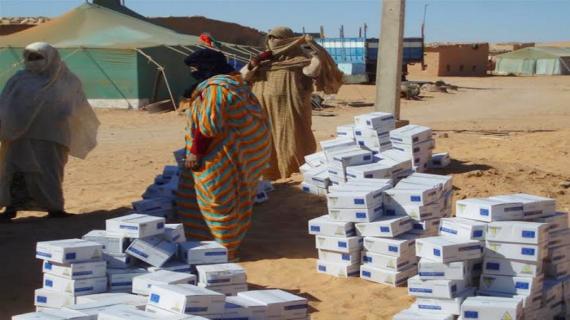 The Taxpayer’s Association of Europe, a federation of 29 national taxpayers’ associations throughout Europe, mustering more than one million members, has called on the European Union to investigate the misappropriation by Algeria and Polisario of the humanitarian aid sent to the Tindouf camps.

The call was made by Director of the Brussels office of the Taxpayer’s Association of Europe, Walter Grupp, in an interview with European information website ‘EuToday.net’.

Walter Grupp deplored that since the publication of the scathing OLAF report in 2015 that document the systematic diversion of humanitarian aid destined to the Tindouf camps populations no action has been made to stop the embezzlements.

“I believe that somebody at the level of those institutions (European Commission) does not take this matter seriously,” Grupp said.

Thye London-based news outlet EUToday also interviewed Bulgarian Member of the European Parliament, Ilhan Kyuchyuk, who has recently raised the matter of the aid embezzlement with the European Commission.

“The European Parliament closely follows the situation on the ground and takes action when necessary. The EU taxpayers’ money must be spent properly and we should not close our eyes when there is such a misuse of funds,” the MEP pointed out.

“However, leaving aside the forces involved and political conflicts, this is an internal European debate around the transparency and the truth of our European political institutions and systems,” EUToday commented.

It is also about defending the populations in the Tindouf camps, it said, noting that in addition to being deprived of drinking water and electricity, and living in tents in deplorable conditions, these populations “must suffer the greed of the Polisario leaders who exploit their misery to get enriched.”

The living conditions in the camps are deteriorating, the website said, adding that a UN Security Council report (October 2019) highlighted, amongst other issues, a distressing increase in levels of malnutrition in the camps.

“This is the human cost of the misappropriation of food aid,” EUToday pointed out.

After several members of the European Parliament have lately denounced the continuing diversion of the European Union’s humanitarian assistance to the Tindouf camps and after an investigative article published by EUToday revealed new evidence of the diversions, a draft resolution was tabled lastr week before the European institution.

The text denounces the continuation of this fraud and calls for an audit of the European aid diverted by the polisario and its mentor, Algeria.

Members of the European Parliament have thus triggered the official referral mechanism of the EP regarding the diversion of the humanitarian aid intended for the populations held against their will in the Tindouf camps in southwestern Algeria.