he Kingdom of Bahrain on Monday opened in Laayoune a consulate general, the 10th diplomatic representation inaugurated in the city in one year.

Bahrain becomes the tenth country to open a diplomatic rerepsentation in the southern city of Laayoune after the Union of the Comoros, Gabon, the Central African Republic, Sao Tome and Principe, Burundi, Côte d'Ivoire, Eswatini, Zambia and the United Arab Emirates.

The opening on Monday of a consulate general of the Kingdom of Bahrain in Laâyoune is an undeniable proof of the solidarity shared between the two countries, underlined Minister of Foreign Affairs, African Cooperation and Moroccans Abroad, Nasser Bourita. 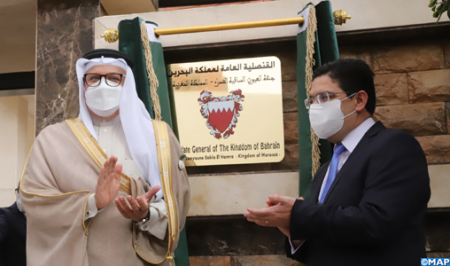 This very strong diplomatic act is part of the constant support of this Gulf country for the territorial integrity of Morocco and the autonomy plan under Moroccan sovereignty, said the minister who was speaking during a press briefing with his Bahraini counterpart, Abdellatif Bin Rashid Al Zyani on the occasion of the inauguration of this diplomatic representation.

He said that the inauguration of this consulate perfectly reflects the shared solidarity, distinguished relations, sincere friendship, solid fraternity and the bonds of reciprocal esteem between the two Kingdoms, under the leadership of HM King Mohammed VI and HM Hamad Bin Isa Al Khalifa.

The Kingdom of Bahrain has always expressed its solidarity with Morocco for the defense of its territorial integrity, the preservation of its unity, its stability and security, he noted adding that Morocco has never failed, for its part, to support the stability and security of Bahrain, particularly in the face of Iranian interventions.

He recalled that this inauguration gives concrete substance for the latest telephone call between HM the King and His brother HM Hamad Bin Isa Al Khalifa, during which the Sovereign of Bahrain welcomed the decisions ordered by His Majesty the King in the region of El Guerguarat, in the Moroccan Sahara, and which resulted in a decisive and effective intervention to preserve peace and stability in this part of the Moroccan territory, and to guarantee a normal and secure flow of people and goods between the Kingdom of Morocco and the Islamic Republic of Mauritania.

After stressing that the Moroccan people strongly appreciate this gesture from Bahrain, Bourita noted that this inauguration comes a few days after the American decision to recognize the Moroccanness of the Sahara and the resolute intervention of the Royal Armed Forces in El Guerguarat.

Bourita finally assured that Morocco will continue to work to permanently establish its sovereignty over all the southern provinces, specifying that other countries will follow the example of the around twenty States which have opened, or will very soon, diplomatic representations in Dakhla and Laâyoune.

The opening on Monday of a consulate general of the Kingdom of Bahrain in Laâyoune, capital of the Moroccan Sahara, constitutes "a historic step" in the centuries-old relations between the two countries, said Bahraini Foreign Minister Abdullatif bin Rashid Al Zayani. "The opening of the consulate general is a historic step which confirms Bahrain's full support and solidarity with Morocco in its historical and legitimate rights over its Sahara", said Al Zayani during a joint press briefing with Minister of Foreign Affairs, African Cooperation and Moroccans Abroad Nasser Bourita, held at the end of the inauguration of this diplomatic representation.

The Bahraini top official indicated that the two countries are reaching today "an additional milestone in the building of their fraternal, friendly and solidarity-based relations", recalling that his country "has been and will always remain by the side of Morocco" in the defense of its territorial integrity and its sovereignty over the whole of its territory.

He also welcomed the excellent bilateral ties, which constitute a model of relations between two brotherly states, expressing his country's desire to further strengthen the multidimensional cooperation with Morocco, in accordance with the directives of the Bahraini Sovereign.

In addition, he noted that HM Hamad Bin Isa Al Khalifa welcomes the recognition by the United States of the full sovereignty of Morocco over the whole of its Sahara and the forthcoming opening of a US consulate general in Dakhla, describing as a "historic step" this decision that would further promote the strategic partnership between the Kingdom and the United States of America.

He also highlighted the constant position of Bahrain and Morocco in support of the Palestinian question, recalling that the two countries support the legitimate rights of the Palestinian people to an independent state with Al-Quds Al-sharif as capital, in the framework of international law, the Arab Peace Initiative and the two-state solution.

The inauguration ceremony of the Consulate General of Bahrain, the 10th diplomatic representation opened in the capital of the Moroccan Sahara in a year, took place in the presence of the wali of the region of Laâyoune-Sakia El Hamra, Abdeslam Bekrate, the president of the Regional Council, Sidi Hamdi Ould Errachid, in addition to diplomats accredited to Laâyoune, elected officials and local officials.

Bahrain has thus followed in the footsteps of the Union of the Comoros, Gabon, the Central African Republic, Sao Tome and Principe, Burundi, Côte d'Ivoire, Eswatini, Zambia and United Arab Emirates. 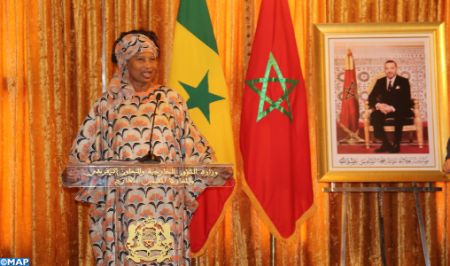