The authoritarian regime in Algiers is running out of options in its desperate attempt to draw Morocco as the enemy next door. After instigating its media and co-opted politicians to launch a vicious campaign against Morocco’s territorial integrity, now came the turn of mosques.

In a blatant manipulation of religion and mosques to serve the hegemonic aims of the military regime, the Algerian religious affairs ministry ordered that the Friday sermon be turned into diatribes against Morocco’s right to its territorial integrity. 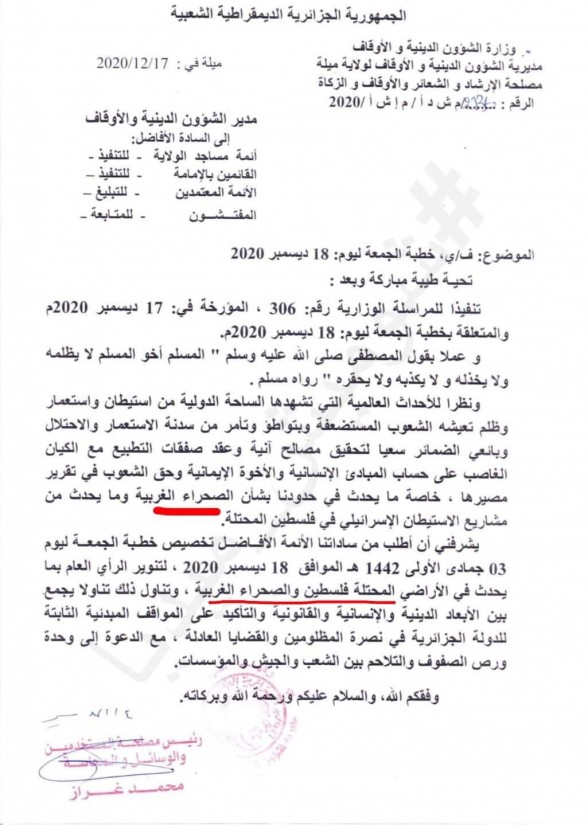 The ministry also ordered Algerian Imams to draw a parallel between Palestine and the Moroccan Sahara and to warn of what they consider as the Zionist threat near their borders in an allusion to Morocco.

Needless to say, such directives show endemic anti-semitism and run against the values of religion itself which calls for unity. they also violate the values of neighborliness.

this also shows that the Algerian regime is willing to do anything to sow the seeds of hostility among the Algerian people towards Morocco.

Algeria has lost all its cards in its desperate quest to undermine Morocco by supporting separatism. Not only did Algerian regime turn its back to the joint struggle for its independence in which Moroccans played a key role, post independent Algeria has waged indirectly war on Morocco since 1975.

As the ruling Algerian elite remain bogged down in a cold-war mentality and refuse to pull their head out of the sand, the world has changed and the balance of power is shifting on the Sahara issue. The recognition by the US of Morocco’s sovereignty over the Sahara is the final nail in the Algerian sponsored separatist project.

Algeria’s attempts to portray Morocco as an enemy is a desperate step to thwart any sort of domestic unrest. But this will not prevent the Algerians’ Hirak from continuing its pressure on the regime to step down.

The approaching end of the coronavirus restrictions combined with acute financial hardship are set to put an end to Algeria’s social peace based on lavish spending on subsidies.

Algeria’s demise will be self-inflicted and Morocco’s recent diplomatic success is but a reminder for Algeria of its utter failure on all economic, social, democratic and economic fronts.