Eminent international personalities, including political leaders and elected officials from several countries and regional parliaments, former and in-office, addressed a letter to U.S. President Joe Biden in support of the decision of the United States of America recognizing Morocco's full sovereignty over its Sahara, affirming that the Moroccan autonomy initiative is the only lasting solution to this artificial conflict. 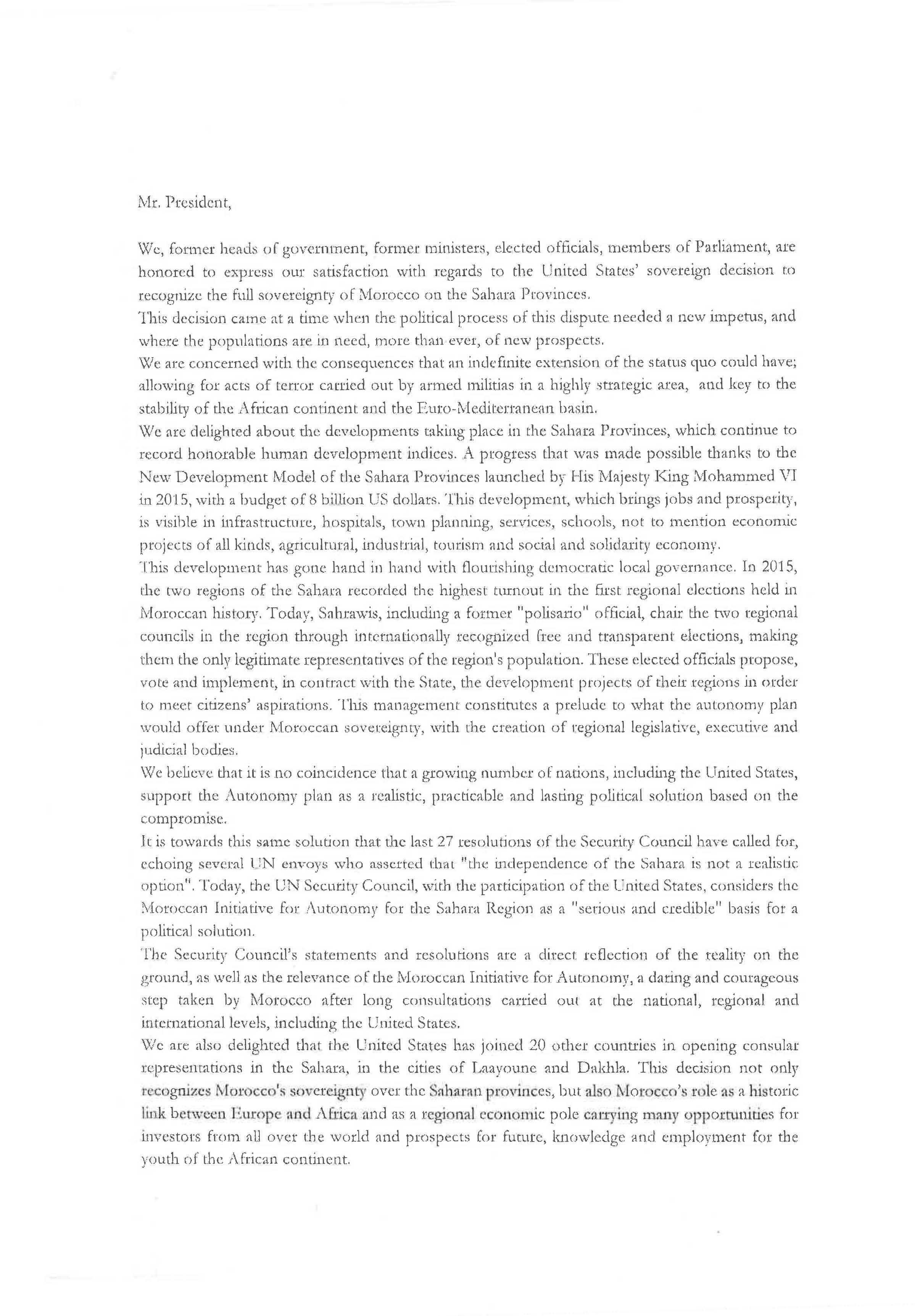 "Mr. President, We, former heads of government, former ministers, elected officials, members of Parliament, are honored to express our satisfaction with regards to the United States' sovereign decision to recognize the full sovereignty of Morocco on the Sahara Provinces," stress the signatories of this letter, which is included in a tweet published by the former Italian Minister of Foreign Affairs and former ambassador to the United States and Israel, Giulio Terzi.

This call was able to gather in a very short time 250 signatories from 25 countries around the world. They are Italy, Argentina, Armenia, Belgium, Bulgaria, Canada, Chile, Colombia, Denmark, Dominican Republic, Czech Republic, El Salvador, Estonia, Finland, France, Greece, Guatemala, Honduras, Hungary, Ireland, Paraguay, Peru, Saint Lucia, Serbia, Spain, as well as members of the European Parliament and mayors of major cities and municipalities in Europe and around the world.

This decision came at a time when the political process of this dispute needed a new impetus, say the signatories.

Autonomy, they add, is the only way to end the suffering of the people living in the Tinduf camps in Algeria, to ensure reconciliation and achieve permanent peace and stability in a strategic region, by creating a real vector of peace, stability and prosperity in Africa and even in the world.

“We welcome the United States' decision to recognize the autonomy initiative as the sole basis for a solution to the regional dispute over the Sahara, as we believe it opens concrete perspectives to guide the UN's political process towards a final solution,” they underline, expressing confidence that the United States, under the presidency of Joe Biden, will continue to advance the Sahara issue towards a just and lasting solution thanks to its continued support for the Moroccan Initiative for Autonomy.

“We are concerned with the consequences that an indefinite extension of the status quo could have allowing for acts of terror carried out by armed militias in a highly strategic area, and key to the stability of the African continent and the Euro-Mediterranean basin,” underline these various personalities, from all political persuasions, with a predominance of center-left parties.

In addition, the signatories commend the developments taking place in the Sahara Provinces, which continue to record honorable human development indices, noting that this achievement was made possible thanks to the New Development Model of the Sahara Provinces launched by His Majesty King Mohammed VI in 2015, with a budget of 8 billion US dollars.

This development, which brings jobs and prosperity, they say, is visible in infrastructure, hospitals, town planning, services, schools, not to mention economic projects of all kinds, agricultural, industrial, tourism and social and solidarity economy.

This development has gone hand in hand with flourishing democratic local governance. In 2015, the two regions of the Sahara recorded the highest turnout in the first regional elections held in Moroccan history, stress the signatories of the letter.

Today, Sahrawis, including a former "polisario" official, chair the two regional councils in the region through internationally recognized free and transparent elections, taking them the only legitimate representatives of the region's population, they say, adding that these elected officials propose, vote and implement, in contract with the State, the development projects of their regions in order to meet citizens' aspirations.

They note that this management constitutes a prelude to what the autonomy plan would offer under Moroccan sovereignty, with the creation of regional legislative, executive and judicial bodies.

“We believe that it is no coincidence that a growing number of nations, including the United States, support the Autonomy plan as a realistic, practicable and lasting political solution based on the compromise,” the 250 signatories insist.

They indicate that it is towards this same solution that the last 27 resolutions of the Security Council have called for, echoing several UN envoys who asserted that "the independence of the Sahara is not a realistic option.”

Today, the UN Security Council, with the participation of the United States, considers the Moroccan Initiative for Autonomy for the Sahara Region as a "serious and credible" basis for a political solution, they say.

The Security Council's statements and resolutions are a direct reflection of the reality on the ground, as well as the relevance of the Moroccan Initiative for Autonomy, a daring and courageous step taken by Morocco after long consultations carried out at the national, regional and international levels, including the United States, the letter explains.

The signatories also hail the fact that the United States has joined 20 other countries in opening consular representations in the Sahara, in the cities of Laayoune and Dakhla. This decision not only recognizes Morocco's sovereignty over the Saharan provinces, but also Morocco's role as a historic link between Europe and Africa and as a regional economic pole carrying many opportunities for investors from all over the world and prospects for future, knowledge and employment for the youth of the African continent.

Will the US grant financial aid to Morocco to support normalization with Israel ?
01 April 2021