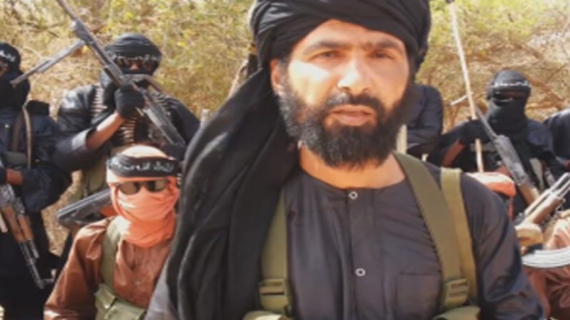 “This is another major success in the fight we are waging against terrorist groups in the Sahel,” added the French Head of State.

This summer, in June and July, Paris had already announced the death or capture of several high-ranking ISGS executives by the French Barkhane force and its partners, as part of its strategy to target the leaders and executives of jihadist organizations.

The leader of the ISGS “died from injuries incurred following an airstrike carried out in late August by the Barkhane force,” French Armed Forces Minister Florence Parly tweeted for her part, hailing “a decisive blow against this terrorist group.”

“The death of Adnan Abou Walid al-Sahrawi is a decisive blow to Daesh’s leadership in the Sahel but also to its cohesion,” Parly emphasised, describing him as “the absolute leader of the ISGS that took all decisions.” “Our fight continues,” she insisted.

General Thierry Burkhard, Chief of Staff for the French Army, was quoted by the media as saying that the operation that neutralized al-Sahrawi was carried out from August 17 to 22. It had been organized following the capture in mid-July of several ISGS fighters which had enabled French forces to identify several sites in which he was likely to have holed himself up.

The operation involved special commando forces on the ground as well as aerial forces including fighter jets and drones, General Thierry Burkhard added.

The ISGS, created in 2015 by Adnan Abu Walid al-Sahrawi, a member of the Algeria-backed polisario front and the jihadist movement Al-Qaeda in the Islamic Maghreb (AQIM), had been designated as a “priority enemy” in the Sahel, during the summit in Pau (southwestern France) in January 2020.

He is considered to be behind most of the attacks in the “tri-border” region, a vast area straddling Mali, Niger and Burkina Faso.

This area is a recurring target of attacks by two armed jihadist groups: the Islamic State in the Greater Sahara (ISGS) and the Al Qaeda affiliated Group for the Support of Islam and Muslims (GSIM).

ISGS has carried out particularly deadly attacks, targeting civilians and military personnel, in Mali, Niger, and Burkina Faso. It had targeted U.S. soldiers in a deadly attack in October 2017, in which four soldiers of the U.S. Special Forces and four Nigeriens were killed in an ambush in Tongo Tongo, near Mali in southwestern Niger. By the end of 2019, ISGS had carried out a series of large-scale attacks on military bases in Mali and Niger.

On August 9, 2020, in Niger, the leader of ISGS personally ordered the assassination of six French aid workers and their Nigerien guide and driver. This attack against young people involved in humanitarian work caused a stir in France and in Niger, which was then classified as a red zone, i.e. “formally inadvisable”, with the exception of the capital Niamey, by the French Ministry of Foreign Affairs.

After more than eight years of significant engagement, Emmanuel Macron announced in June a reduction of the French military presence in the Sahel and the end of the anti-jihadist operation Barkhane in favor of a tightened force, refocused on counter-terrorism operations and combat support for local armies, around an international alliance involving Europeans.

“The Nation thinks tonight of all its heroes who died for France in the Sahel in the Serval and Barkhane operations, of the bereaved families, of all its wounded. Their sacrifice is not in vain. With our African, European and American partners, we will continue this fight,” added Emmanuel Macron in another tweet.