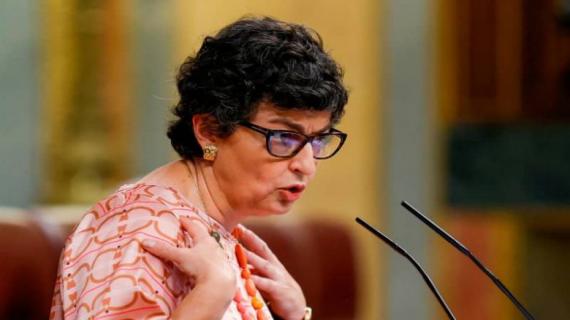 Former Spanish foreign minister Arancha Gonzalez Laya will stand before a judge in Zaragoza for her role in violating Spanish and Schengen laws by allowing the entrance of a Polisario leader in secrecy in an attempt to help the Algerian proxy evade Spanish justice.

The military officials in charge of allowing flights into the airport of Zaragoza acknowledged that they have received orders from the foreign ministry to let an Algerian presidential plane into the airport without checking the travel document of Polisario leader Brahim Ghali.

Laya’s careless acts and her connivance with Algeria’s Polisario proxies cost her her job in the most recent reshuffle of the Spanish government.

Morocco had protested and rejected the Spanish move to admit Polisario leader under the false identity of Benbatouch for medical treatment in Logrono without even informing Rabat.

Morocco’s foreign ministry had made it clear then that Spain’s connivance with Algeria to admit Ghali or Benbatouch under a false identity and in secrecy was a stab in the back of the solid partnership with Morocco.

Morocco has recalled its ambassador since the crisis outbroke in May but in a speech last August, King Mohammed VI said Morocco wants closer ties with Spain without compromising on its supreme interests.

“We are keen today to strengthen relations bearing in mind the need for a common understanding of the two nations’ interests,” the King said.

This “unprecedented crisis … shook mutual trust and raised many questions as to their future,” said the king, noting that the two countries have discussed bilateral ties since the crisis.

Morocco looks forward to “usher in a new, unprecedented phase in the relations between the two countries, on the basis of trust, transparency, mutual respect and the fulfillment of obligations,” he said.

Spanish media reported Tuesday that the Spanish Foreign Minister José Manuel Albares will hold a virtual meeting on Wednesday with his Moroccan peer Nasser Bourita to discuss bilateral relations, regional issues, and relations with the European Union, on the sidelines of the UN General Assembly

The meeting, to be held at the request of the head of Spanish diplomacy, is meant to consolidate the relationship of mutual respect between the two countries, and to to take a step closer to normalization, diplomatic sources told Europa Press.