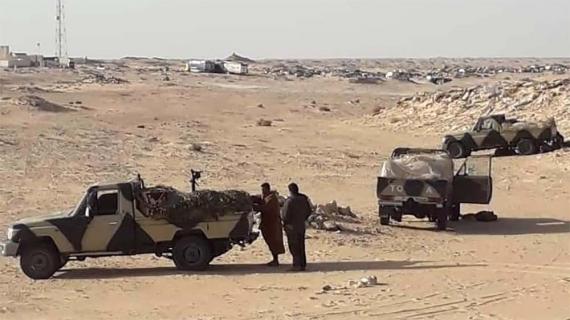 Guterres informed the Council that since October 22 reconnaissance operations by Minurso helicopter over Guergarat have found the presence in the buffer strip of 12 armed polisario members in military uniform.

Minurso observers also confirmed the presence of 8 military vehicles, two of which were equipped with heavy weapons, Guterres went on to say in his report, which covers the period from 1 September 2020 to 31 August 2021.

A deployment that the "polisario" tried to justify as a so-called "protection of civilian demonstrators" also present in the buffer zone.

The confirmed presence of armed "polisario" members among a group of 50 people, including children and women, is proof that this separatist group was using them as human shields to block the passage to Guergarat.

These violations by the "polisario", which Morocco has not stopped to denounce, lasted for three weeks during which the so-called "demonstrators" and armed elements of the "polisario" obstructed all traffic between Morocco and Mauritania, as confirmed in the report of the Secretary-General and not allowing access to the observers of Minurso.

Guterres told the Council that the "polisario" was informed by Minurso that its presence in Guergarat was "a violation of the Military Agreement No. 1" and "urging it to withdraw its military personnel and vehicles from the buffer strip."

The military presence of the "polisario" in Guergarat, last year, reinforces the position of Morocco, which had continued to call on the UN SG, including through a letter addressed to him by HM King Mohammed VI, on November 12, 2020, to "increase efforts to put an end quickly and definitively to destabilizing provocations of the polisario."

In the same letter, HM the King said that the "Kingdom of Morocco, by its responsibilities and in full respect of international legitimacy will act in the manner it deems necessary, to safeguard the status of the area and restore the free movement" in Guergarat, the report stated.

Following the blockage by the armed separatist militias of the "polisario" for more than three weeks of the passage of Guergarat, between the borders of Morocco and Mauritania, in October 2020, Morocco undertook, on November 13, 2020, an action by which it restored, once and for all, the free movement of people and goods in this crossing.

The peaceful aspect of this intervention of the Royal Armed Forces was highlighted in the report of the UN Secretary-General, who stated that no casualties were reported to Minurso in the events of the day of November 13, which is a strong denial of the accusations of the "polisario", whose armed elements fled the buffer zone of Guergarat, following the intervention of FAR, as confirmed by Guterres.

The UN Secretary-General denied all the allegations of the "polisario" of a so-called war situation on the ground, making it clear that this armed group carries out hostile actions, of "low intensity", "mainly concentrated in the north near Mahbas and which have even drastically decreased since January 2021.

The Secretary-General highlighted that FAR systematically respond to the provocations and harassment actions of the "polisario" on the ground.

In this context, he referred to the speech of HM the King, on November 7, 2020, on the occasion of the Green March, in which the Sovereign said that the Kingdom will "respond, with the utmost firmness and resolve, to any practice or attempts designed to undermine the security and stability of its southern provinces".