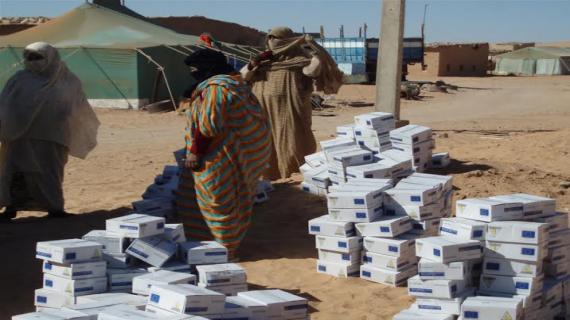 Guterres said in his report that the Office of the High Commissioner for Human Rights has received information from NGOs that the "polisario" has diverted humanitarian aid and funds in the Tindouf camps.

This confirmation of the UN Secretary General comes after that of the European Anti-Fraud Office (OLAF), which reported major misappropriations of humanitarian aid, for more than four decades, by the leaders of the "polisario" and Algerian officials. It is also an addition to the overwhelming findings of inspection reports by the United Nations High Commissioner for Refugees and the UN World Food Programme on this issue.

The diversion of humanitarian aid destined for the Tindouf camps, in a systemic, organized and large-scale manner, serves the personal enrichment of the "polisario" militias and Algerian officials, as highlighted in the OLAF report.

At a time when the Secretary-General's report warns of the deteriorating humanitarian situation in the Tindouf camps, the separatist leaders of the "polisario" are enriching themselves at the expense of the suffering and deprivation of a population held against its will in these camps.

This detour is facilitated by the lack of registration of the population of the Tindouf camps, rejected by the host country, Algeria, in serious violation of its international obligations and Security Council resolutions since 2011.

After this mention, for the first time, of the diversion of humanitarian aid by the "polisario" in the report of the UN Secretary General to the Security Council, the separatist movement and its Algerian sponsor can no longer deny their abject crime against the population of the Tindouf camps.

Finally, the UN Secretary General refers to the general situation of human rights violations in the Tindouf camps, aggravated by the COVID-19 pandemic.

Indeed, the pandemic has ravaged these camps, which have experienced a second and third wave, as highlighted by Guterres in his report. This disastrous situation is mainly due to the delegation by Algeria of all its responsibilities and obligations on its territory, and therefore, the health management of the camps, to an armed separatist group, with proven links to international organized crime and terrorism in the Sahel.