Colombia extends to the Sahara the consular jurisdiction of its embassy in Rabat, in a clear recognition of the Moroccanness of the southern provinces 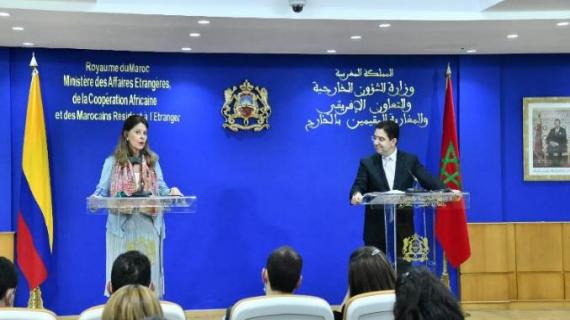 Colombia has decided to extend the consular jurisdiction of its embassy in Rabat to the whole Moroccan territory, including the Sahara.

The decision, announced in a joint statement issued Thursday at the end of talks in Rabat between the Colombian Vice-President and Minister of Foreign Relations of Colombia, Marta Lucia Ramirez, who is currently on an official visit to the Kingdom, and her Moroccan peer Nasser Bourita, means Colombia’s recognition of Morocco’s sovereignty over its Sahara provinces.

The joint statement pointed out that Ramirez informed Bourita “of the instructions given to the new ambassador of Colombia in Rabat, to extend the consular jurisdiction of the Embassy of Colombia in the Kingdom of Morocco on the entire Moroccan territory, including the Sahara”.

According to the joint statement, Ramirez stressed, as recognized in various resolutions of the UN Security Council, “the serious efforts made by the Kingdom of Morocco in the search for a pragmatic, realistic and lasting political solution to this dispute, within the framework of the political process conducted under the exclusive auspices of the UN”.

The Colombian official who discussed with her Moroccan peer the latest developments of the Sahara issue underlined “the importance” of the Moroccan Autonomy Initiative, as a pathway “to reaching a political, realistic, lasting solution based on the compromise of all parties, with a view to putting an end to this question, which is vital for Morocco, within the framework of its sovereignty and its territorial integrity.”

The two officials who also discussed the issue of migration underlined that Colombia and Morocco share a common vision of a migration policy that safeguards the legitimate rights of migrants and guarantees their dignity.

“Colombia and Morocco converge in their vision of a migration policy that safeguards the legitimate rights of migrants and guarantees their dignity,” said the joint statement, adding that the two sides convened that the migration phenomenon and its impact represent a real challenge for the international community.

In this connection, Bourita welcomed, when tackling the crisis in Venezuela, “the extensive work carried out by Colombia to address the humanitarian situation resulting from the large number of Venezuelan migrants arriving in the country,” stressing the importance of Colombia’s adoption of the Temporary Protection Status for Venezuelan migrants and its decision to grant them the Temporary Protection Card.

In addition, Bourita reiterated the support of Morocco to the policy of “Peace with Legality” led by the President of Colombia, Ivan Duque Márquez, and the multiple actions of stabilization undertaken by Colombia in the implementation of peace agreements.

He hailed the efforts of President lván Duque Márquez and his Government in the area of peace and legality, as well as the improvement of conditions in the country’s regions and the impact of these measures in terms of stability and perception, the joint statement stated.

Bourita also welcomed the decision announced by the Prosecutor General of the International Criminal Court to close the preliminary file on Colombia.