Flagrancy of Algeria's Role in Sahara Issue is 'Irrefutable' - Hilale 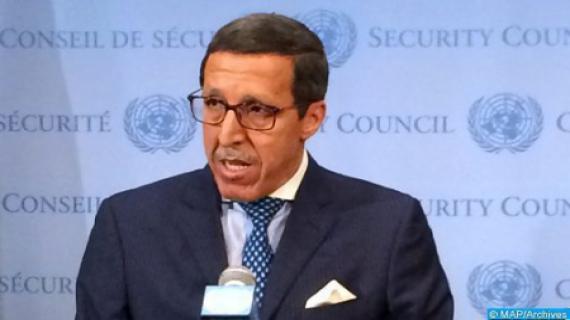 "Algeria's primary responsibility in creating and maintaining the regional dispute over the Moroccan Sahara is proven at all political, diplomatic, military, legal and humanitarian levels. Whether Algeria likes it or not, the flagrancy of its acts and decisions is irrefutable," said Mr. Hilal before the UN General Assembly's Fourth Committee.

He recalled that Algeria, following the signing of the Madrid Agreement, has officially claimed status of a concerned party that is interested in the Moroccan Sahara, and this in a letter sent to the Council by Algeria's Permanent Representative, who stated that the "concerned and interested parties in the Western Sahara issue are Algeria, Morocco and Mauritania."

This is a "historic" claim, as it "consecrates Algeria as a concerned party even ahead of Morocco, while totally disregarding the "polisario", which was freshly created by Algeria and its ally, the former dictator Moammar Kaddafi," the Moroccan ambassador explained, recalling that Algeria participated directly in the battles of Amghala 1 and 2 in the 1970s, where dozens of Algerian soldiers had been taken prisoner by the Royal Armed Forces.

In addition, the Moroccan diplomat pointed out that Algeria, according to its own newspapers, has spent, in 46 years, over $375 billion in its war of attrition against Morocco, including by funding, training and entirely arming the "polisario", at the expense of the socio-economic development of the country. Algeria "dedicates its diplomatic apparatus to the service of a single agenda, that of the Moroccan Sahara."

"Algeria refused the Framework Agreement prepared by James Baker in 2001. It proposed the partition of the Moroccan Sahara in 2002. It took part in the Manhasset meetings from 2009 to 2012. Its two foreign ministers participated in round-table discussions in Geneva in 2018 and 2019," said the ambassador.

He added that Algeria is considered by the Security Council as a party. That is why it has been called upon it in its latest resolutions, including last Friday's Resolution 2602, to participate in the round-table meetings, being mentioned five times, as many times as Morocco.

Mr. Hilale also pointed out that Algeria "which claims to be concerned about its sovereignty, which is quite legitimate, contradicts this profession of faith by ceding part of its territory and, therefore, its sovereignty to a separatist armed group, the 'Polisario', in the camps of Tindouf."

"Morocco has always reached out to Algeria to serve the interests of the two brotherly peoples and the Arab Maghreb region. In turn, Algeria persists in its relentlessness against the territorial integrity of the Kingdom and seeks to harm it by all means," he lamented.

"Whatever Algeria may think, Morocco, with its multi-millennial history, will continue the march of development and emancipation of its People from Tangier to Lagouira," he said. "We will never stop repeating: Morocco is in its Sahara and the Sahara is in its Morocco."