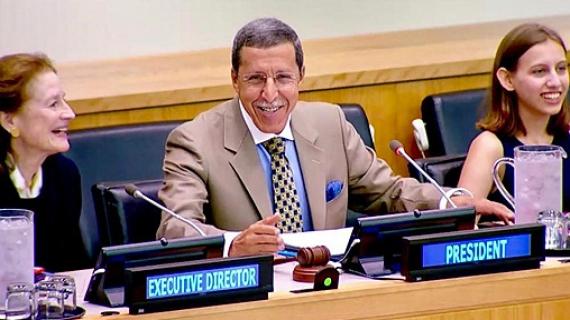 "Guided by the enlightened vision of His Majesty King Mohammed VI, Morocco has implemented, in its Sahara, a development plan that makes it a modern forward-looking region that is rooted in its ancestral cultural and traditional heritage," said Hilale before the 4th Committee of the UN General Assembly.

He also noted that the right to development of the populations of the Saharan provinces of Morocco is a "palpable reality and lived daily."

The considerable development of the Moroccan Sahara, on all levels, makes it a "real" model of integration and multidimensional development, "inclusive and sustainable" in Africa, said the ambassador, considering that the progress made is "enormous", and this through a dynamic development "important" in terms of equipment and infrastructure of international stature, education, youth employment, promotion of self-entrepreneurship, health and enhancement of the Hassani intangible cultural heritage.

These achievements are "irrefutable" evidence of the "resounding" success of the new development model of the southern provinces and the relevance of the proactive development policy adopted by Morocco for a prosperous Sahara, serving as a regional hub between the African continent and the rest of the world, the diplomat stressed.

He noted, in this sense, that the populations of the Moroccan Sahara participate in the design and implementation of this policy and fully enjoy the tangible impact of its achievements.

The major investment projects in the two regions of the Moroccan Sahara, with a budget of more than 8 billion dollars, are indeed carried out with the full participation of local elected officials and the blessing of the populations of the southern provinces, defeating the "false propaganda" of Algeria and the "polisario" as to an alleged "exploitation" of natural resources of the Moroccan Sahara, Hilale added.

The ambassador also said that this development dynamic, combined with the political emancipation of the populations, contributes to the establishment of an integrated, renewed and resilient territorial governance in the Moroccan Sahara.

In this context, the massive participation of citizens of the southern provinces in the general elections of September 8, the highest at the national level, with a turnout of over 63%, "confirms, if it is still necessary, not only their unwavering commitment to their Moroccanness, but also their full support for the development policy of Morocco in its Sahara," he said.

He stressed that the United Nations recognizes moreover to the elected representatives of the Moroccan Sahara, stemming from democratic polls, as attested by the national and international observers, their role of legitimate interlocutors and representatives of the populations of the Sahara, and this through their participation in the C24 and its regional seminars, as well as the round table meetings of Geneva.

This confirmation of the Moroccanness of the Sahara at the internal level, was reinforced, during the past year, by an unprecedented international recognition, stressed Hilale, recalling that the United States of America recognized the full sovereignty of Morocco over its Sahara and considered that the Autonomy Initiative is the one and only solution to this regional dispute.

He also pointed out that 24 African, Arab and American countries have opened Consulates General in the Moroccan cities of Laayoune and Dakhla, "because they are convinced that the Sahara, thanks to the efforts of Morocco, has become an essential platform to ensure the socio-economic development of Africa and strengthen the relations of the continent with the rest of the world”.