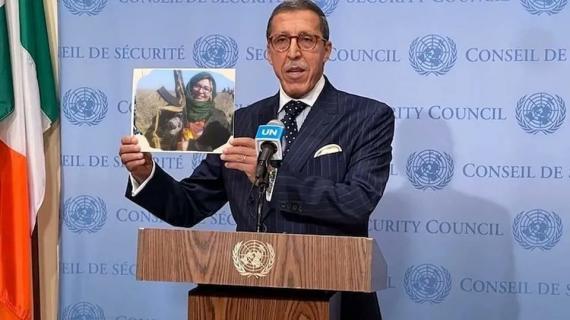 "Concerning the so-called Saultana Khaya, it is necessary to ask since when do human rights activists wear military uniforms and carry Kalashnikovs," asked the Moroccan ambassador.

Hilale presented compelling evidence to the Security Council, in the form of photos showing this separatist, on the payroll of Algeria and the "polisario", in military uniform carrying a Kalashnikov.

The ambassador told the Security Council members that "the individual is not a peaceful human rights defender, but rather an activist of the armed separatist group 'polisario', who has attended several military trainings in the Tindouf camps in Algeria," adding that Saultana Khaya "has called for and continues to incite armed violence against civilians in the Moroccan Sahara."

Mr. Hilale denounced the "recurring baseless allegations on the situation of human rights in the Moroccan Sahara, spread by the armed group the polisario."

"These lies are countered by resolution 2602, adopted on October 29, 2021, by which the Security Council once again welcomed the measures and initiatives taken by Morocco to strengthen the promotion and protection of human rights in the Moroccan Sahara, the role played by the Regional Commissions of the National Human Rights Council of Morocco in Dakhla and Laayoune and the cooperation of Morocco with the mechanisms of the UN Human Rights Council," he stressed.