Algerian regime takes its hostility to Morocco to football stadiums 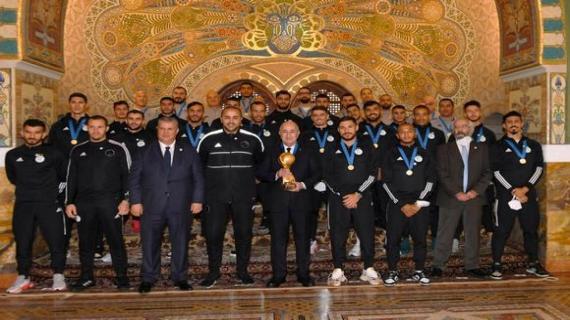 In its latest diversion tactics, the Algerian regime has spitted its venom following a match that opposed Morocco to Algeria as part of the Arab Cup in Qatar.

Algeria’s chief of staff and kingmaker Chengriha, President Tebboune and other henchmen of the military regime all congratulated in official messages their national team for a match at the quarter final stage because the opponent was Morocco.

The game ended with a hard-won win for the Algerian squad with penalties after a 2-2 draw in a game in which both teams had equal chances.

The Algerian team included most players of the official team while Morocco sent its B team with players who only play in the national or Arab championships.

But for the regime in Algiers, it was more than a football game. Algeria’s ambassador in Spain Siad Moussi attended a conference in solidarity with the Polisario separatists in Las Palmas where the game was projected.

“Let’s take this victory at the end of this conference as a sign,” he said, politicizing what is a mere football game.

Other Algerian officials, ministers and diplomats all hinted at the game as a political battle.

On the field, fair play dominated much to the disappointment of haters. But after the game’s end, some Algerians hoisted the Palestinian flag instead of their own flag!

Football might offer a short distraction to a nation in economic and social disarray but will not solve the legitimacy issue that the Algerian regime is facing.

Instigating hatred through a football game contradicts the very fair play values inherent to football and made only Algerian officials look silly in the eyes of the international community.

On the ground, a football game will neither change the balance of power in the ground where Morocco has the upper hand at the diplomatic, military and economic levels.

Algeria has better take a lesson from the quality of stadiums in Qatar, another gas producing country that knew how to invest its resources.

In football the best player does not win and winning a football game only revealed Algeria’s enmity towards the Moroccan people and Algiers quest for virtual wins at a time Morocco changes facts on the ground.