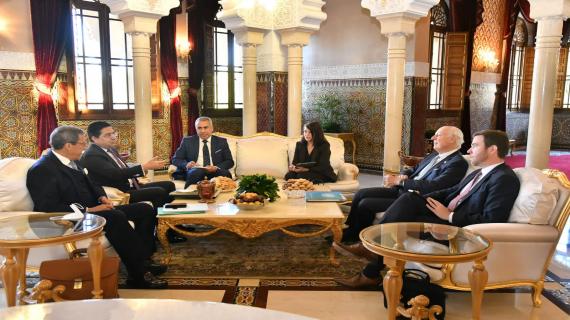 This working session took place in the presence of Permanent Representative of the Kingdom of Morocco to the UN, Ambassador Omar Hilale, said a statement by the Ministry of Foreign Affairs, African Cooperation, and Moroccans Abroad.

The regional visit of de Mistura is part of the implementation of Security Council resolution 2602, adopted on October 29, 2021, in which the UN Executive Body reiterates its call to the parties to continue their commitment to the roundtable process, in a spirit of realism and compromise, to achieve a realistic, pragmatic, sustainable political solution based on compromise, the same source added.

During the talks, the Moroccan delegation reiterated the fundamentals of the Kingdom's position, as recalled in the speeches of His Majesty King Mohammed VI on the 45th and 46th anniversaries of the Green March.

Indeed, the Sovereign had reaffirmed, in the said speeches, Morocco's commitment to the resumption of the political process conducted under the exclusive auspices of the UN to achieve a political solution on the basis of the Moroccan Initiative of Autonomy, within the framework of the process of the round tables, in the presence of the four participants, the statement concluded.