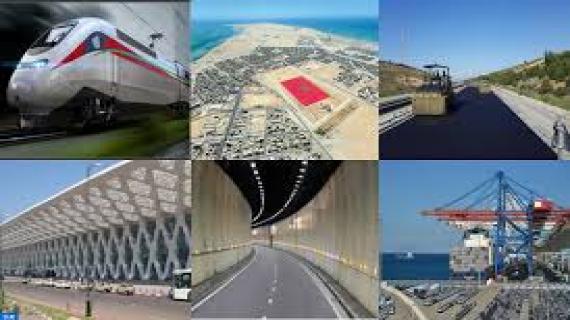 The Moroccan Sahara region “is experiencing an unprecedented economic boom,” writes the magazine L’Essentiel des Relations Internationales in a special report on the occasion of the 35th African Union Summit held in Addis Ababa Feb. 5-6

“The Sahara region is experiencing an unprecedented economic boom, which is supported by an international diplomatic momentum in favor of Moroccan sovereignty over the region and the Autonomy Plan as the only political solution to the regional dispute over the Sahara,” writes the magazine.

“This regional and international momentum is materialized through the American Proclamation of December 10, 2020 (recognizing Morocco’s Sovereignty over the Sahara) and the opening of 23 Consulates, representing all Continents, in the region.”

“This momentum strengthens the political process conducted under the exclusive auspices of the UN to achieve a final solution to this dispute, which will ensure the stability of the region and its surrounding space,” the magazine argues.

The international magazine also highlights the momentum for sustainable and inclusive development in the Moroccan Sahara, noting that the region has experienced in recent years “a sustained development that was embodied on November 6, 2015 through the launch of a new 85-billion-dirham development model.

The article also surveys the strong potential that the Moroccan Sahara region offers economically in the fields of industry, fisheries, agriculture, renewable energy and tourism, noting that the reforms undertaken in the region aim to boost the local economic fabric to create inclusive growth and sustainable development beneficial to local populations.

This region, “with its multiple investment and trade opportunities, is a real socio-economic hub of regional, continental and international dimensions,” writes the magazine, focusing on several structuring projects that have been launched in the region. These include the mega-project of the Dakhla Atlantic Port, the Tiznit-Laâyoune-Dakhla expressway, the West Africa Free Zone project, and seawater desalination projects, especially in Dakhla.

With two cities of trades and skills and a technology park, the Moroccan Sahara region “offers a qualified human capital to support the industrial expansion and the establishment of innovative ecosystems of international standards,” notes the publication.

On the energy front, several projects have been initiated to develop renewable energy in the region with high solar and wind potential, including the installation of wind farms in Tarfaya, Foum El Oued, Akhfenir I and II, and the commissioning of solar power plants Noor Laâyoune I and Noor Boujdour I, intended to establish Morocco’s place as a regional and continental hub of clean energy, notes the magazine.

This global impetus has enabled the Moroccan Sahara “to position itself as a destination of choice for many foreign economic operators,” it adds.

The magazine highlights, on the other hand, the U.S. recognition of the Sahara’s Moroccanness, recalling that Washington has adopted “a new map of Morocco which includes the Sahara, used by all U.S. administrations.”

“The Permanent Mission of the United States to the UN has also disseminated to members of the Security Council and the 193 member states of the United Nations the presidential proclamation of this recognition, in the six official languages of the UN.”

On the economic front, the magazine points out that Washington is committed to the economic and social development of the region by encouraging U.S. investment and funding a number of projects to benefit the local population.