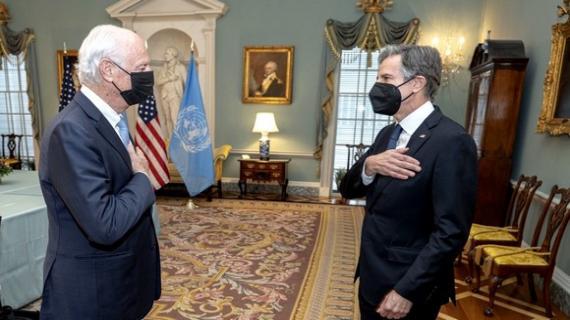 The Biden Administration and the United Nations have reiterated their strong support to the political process seeking a lasting solution to the Sahara regional conflict.

The supportive stand was voiced by U.S. top diplomat Anthony Blinken and UN envoy for the Sahara Staffan de Mistura during a meeting held Thursday in Washington.

The Secretary and Personal Envoy of the UN Secretary General also discussed “diplomatic engagement with international partners to reinforce a credible political process that will lead to an enduring and dignified resolution of the conflict,” added the statement.

Latest UN Security Council resolution 2602 calls on the parties to the Sahara conflict (Morocco, Algeria, Mauritania and Polisario) to continue their commitment to the roundtable process, in a spirit of realism and compromise, to achieve a realistic and enduring political solution.

Rabat has reiterated commitment to the process engaged under the exclusive auspices of the UN to achieve a political solution on the basis of the Moroccan Autonomy Initiative and within the framework of the roundtables format gathering the “four participants” and stakeholders.