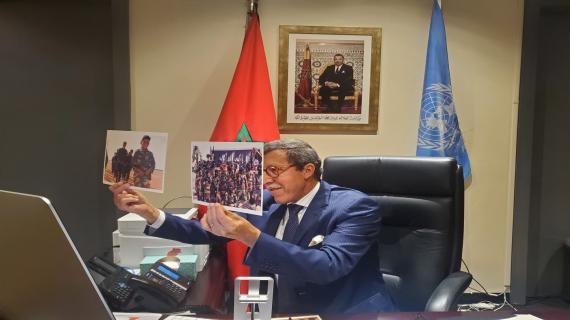 Hilale took this opportunity to draw the attention of participants in this conference to one of the worst forms of human rights violations perpetrated against the populations held against their will in the camps of Tindouf, namely the military recruitment of children.

In this sense, he called for the mobilization of students, beyond the Moroccans at Harvard University, but also all American academics, to join their voices to those of international actors, to demand the end of military recruitment of children in Tindouf and demand their return to school like all children in the world.

"The University is a place of activism and commitment to raise awareness of the noble causes and fundamental values of human rights," said Hilale, stressing that "the inhuman conditions that the children of Tindouf live should not leave them indifferent".

In this regard, he drew the attention of the audience to the seriousness of the subjection of these children to fanatical indoctrination and military training, and this, in flagrant violation of human rights conventions, conventions on children's rights, Security Council resolutions and several international declarations.

The connivance of the polisario with terrorist groups in the Sahel-Saharan region is proven, highlighting "the direct international responsibility of Algeria, because this forced military recruitment of children takes place on its territory," said Hilale.

During this conference, several young academics expressed their indignation at the military recruitment of these children, their exploitation and their involvement in this conflict, stressing that this is a practice that should be condemned by the international community. They also questioned the fate of children indoctrinated militarily and the impact of this recruitment in the continuation of the artificial conflict maintained over the Moroccan Sahara.

In addition, ambassador Hilale highlighted Morocco's priorities at the UN in terms of sustainable development and peacekeeping.

"Morocco, under the enlightened leadership of His Majesty King Mohammed VI, is strong in its conviction in favor of the multidisciplinary issues of sustainable development, climate action and energy transition, especially through South-South and triangular cooperation," he said, stressing the importance of preparing the next generation of decision-makers to be actively involved in this national development trajectory.

Regarding peacekeeping missions, the diplomat said that the Kingdom has invested since 1960 in maintaining and building peace by contributing to several peacekeeping operations (PKOs) particularly in Africa.

"Morocco is among the top 12 troop and police contributing countries. In this context, the Permanent Mission of Morocco in New York also acts as coordinator of the Group of Non-Aligned Countries for peacekeeping operations, which is the largest contributor to UN peacekeeping with more than 90% of the workforce," he said.