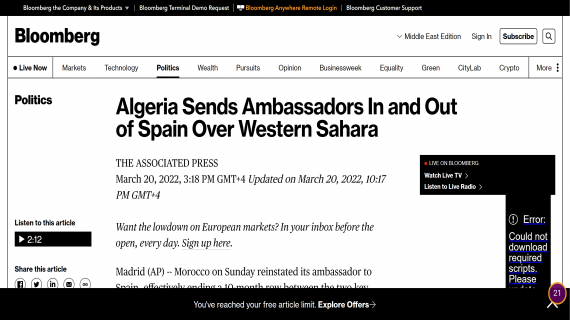 Algeria has once again discredited itself and showed the world that it’s the genuine party to the artificial dispute over the Sahara, after it recalled its ambassador to Madrid for consultation following Spain’s support for Morocco’s territorial integrity and the autonomy plan for the Sahara.

Spain’s PM Sanchez had sent a letter to King Mohammed VI saying that his country considers the autonomy plan as “the most serious, credible and realistic basis” for a solution of the dispute.

This new stance entails full recognition of Morocco’s sovereignty over the territory, a move that dissipated a fog of diplomatic tension between the two countries.

In a short statement, Algeria’s foreign ministry said it was “surprised” by the sovereign decision of a European country and in protest recalled the ambassador.

Some analysts are already evoking the shock effect within an Algerian regime that has squandered its resources on sponsoring, arming and backing diplomatically a separatist thesis in southern Morocco.

Algeria, which often says it is not a party to the conflict, has previously said it will not attend any new talks organized by the UN about the Sahara. Morocco maintains that there will not be any UN negotiations except if Algeria sits at the table as the real party.

Protesting against a sovereign decision made by Spain also shows the scale of shock, despair and frustration among a military junta that has made the separatist cause their main foreign policy goal.

Algeria however fell short of recalling its ambassador from Washington when President Trump recognized Morocco’s sovereignty over the territory. The Algerian diplomacy has better brace for a major shift in Morocco’s favor and prepare for more such ground-breaking news.