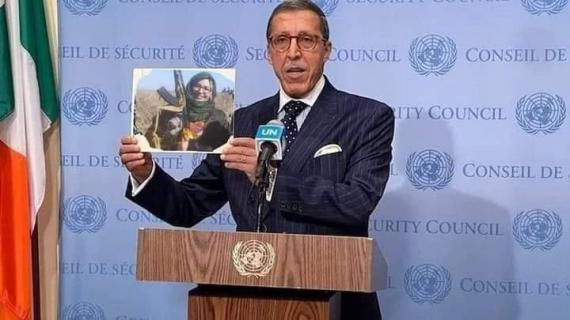 In these letters, the ambassador stressed that "Sultana Khaya is in no way a human rights defender, but rather an agent of Algeria and the +polisario+", adding that this separatist multiplies provocative acts and breaches public order and neighborhood tranquility, by publicly calling for hatred and the use of violence, in particular against civilians, public forces and their family members, as well as the destruction of public property and the glorification of armed action.

Mr. Hilale underlined that this constitutes incitement to terrorist acts.

He pointed out that Khaya embarked on separatist activism and the call for armed action in the Moroccan Sahara, after having been recruited by the "polisario", then trained militarily in Algeria, noting that at this end, and in possession of a Moroccan passport, she had made since March 2010 13 visits to Algeria and to the Tindouf camps, during which she benefited from numerous sessions in the use of firearms and took part in military exercises led by the "polisario" separatists.

The diplomat added that the separatist was trained by experts, in particular Algerian, into media propaganda techniques, instrumentalization of various facts for political purposes, incitement to violent acts, manipulation and falsification of pictures and video recordings and the use of false complaints to UN mechanisms, with the aim of instrumentalizing them against the Moroccan authorities.

Mr. Hialle added that in order to finance her activities serving the agenda of Algeria and its separatist armed group the "polisario", she receives from them a monthly subsidy of nearly 4,300 Euro, in her capacity as president of a so-called non-registered entity, known as the “Sahrawi league for the defense of human rights and the protection of natural resources”.

In April 2021, the “polisario” sent to this person and her sister additional funding for their activities in support of this armed group (purchase of computers, sound equipment, etc.), he said.

Mr. Hilale stressed that all the allegations regarding alleged attacks on the freedom of movement of the person concerned or her family and on their physical integrity or their home, are baseless and constitute low maneuvers from Algeria and the “polisario”.

In this regard, he noted that Khaya “has a Moroccan passport and travels abroad freely and on a regular basis, where she leads attacks against Morocco and conveys fake news on the situation of human rights in the Moroccan Sahara, without ever being bothered or arrested by the Moroccan authorities upon her return."

The diplomat also told the Security Council and the UN Secretary-General that Sultana Khaya has just visited on June 1, 2022, Las Palmas, Spain, adding that the separatist was able to carry out all the steps that allow her to leave the Moroccan territory, after obtaining her new Moroccan passport, thus contradicting her baseless allegations regarding an alleged house arrest.

Mr. Hilale said that this separatist has never filed a complaint about any type of violation allegedly committed against her.

“Following the allegations of so-called sexual assaults that she claims to have suffered and of a so-called violation of her home, the Moroccan judicial authorities reacted by opening investigations into these alleged facts," he said, noting that the so-called Khaya refused to cooperate, as she systematically declined the visit of the Regional Commission of the National Human Rights Council (CRDH) to Laayoune, which sought to collect her statements and rejected as well the medical assistance which was offered to her.

A delegation from the National Human Rights Council (CNDH) including a medical examiner was dispatched to Boujdour on February 14 and 15, 2022, to meet members of Khaya's family, he recalled, noting that they have all denied the alleged accusations of sexual assault, as well as the allegation of house arrest by the Moroccan authorities.

“In addition, recordings on the Internet clearly show that Khaya and her sister were instructed by the +polisario+ to claim baseless sexual assault charges against Moroccan public forces,” said Mr. Hilale.

The ambassador noted that Saultana Khaya is trying to turn a simple traffic accident involving an intoxicated trucker, driving a vehicle belonging to a private company on his way to his home which hit her home and the nearby house, into an "assassination attempt".

“Sultana Khaya and her sister, Luara Khaya, claim without any evidence that this is a premeditated act against their family, which is by no means the case. Police opened an investigation in this regard and sent summonses to the injured parties to collect their statements," he underlined, adding that in a clear demonstration of instrumentalization of this traffic accident, Khaya refused to confirm receipt of the summons from the competent authorities, while her neighbour, whose home was also hit, responded to it.

The Ambassador and Permanent Representative of Morocco to the UN also reminded the Security Council and the UN Secretary General that Mary Lawlor, the UN Special Rapporteur on the situation of Human Rights Defenders, has declined the case of Sultana Khaya, which no longer falls within her mandate.

“This decision was taken after the confirmation of the authenticity of the pictures showing her in combat fatigues and carrying a Kalashnikov rifle, thus denying the allegations of Algeria and the +polisario + that the said photos are fake”, he pointed.

Mr. Hilale stressed that the allegations by Algeria and the "polisario" about the so-called Sultana Khaya are completely baseless and unfounded.

“Their only objective is to mislead the international community and instrumentalize the issue of human rights,” the ambassador concluded.