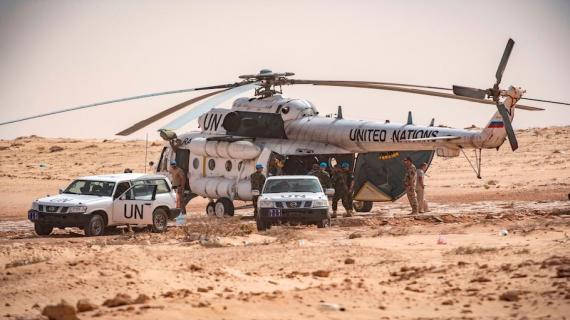 "The threats to MINURSO team sites is a serious mistake on the part of the "polisario". This is what the members of the Security Council expressed during the last private consultations" on the issue of the Moroccan Sahara, Hilale said during his press conference held following the adoption by the Security Council of resolution 2654 extending the mandate of the UN Mission until October 31, 2023.

The ambassador noted that the new resolution of the executive body of the UN summons the "polisario" to stop these violations and obstacles, noting that the armed militias resort to "blackmail of hunger and thirst", which recalls the same procedures adopted by armed groups in some countries of the Sahel. He warned that the "polisario" is committing the same errors and violations as Daech and Al-Qaeda in the Sahel.

Regarding Morocco, Hilale pointed out that the Kingdom, whose cooperation with the United Nations was recognized in the last report of the UN Secretary-General to the Security Council, has undertaken the necessary efforts to ensure the protection and guarantee the resupply of MINURSO observers.

Hilale recalled the warnings of senior Secretariat and MINURSO officials that "if these obstacles persist, the United Nations will have no choice but to withdraw its teams and observers." He warned that if this happens, "this very serious development will create a new situation on the ground."

"Morocco will be entitled to return to the situation ante to 1991 in legal terms and on the ground," he said.

He recalled, in this context, that three days before the entry into force of the ceasefire, late HM Hassan II sent, on September 3, 1991, a letter to the then UN SG Javier Pérez de Cuéllar, informing him that after the withdrawal of the Royal Armed Forces from this area to hand it over to the United Nations, a group of tanks entered the Sahara.

In this letter, HM Hassan II asked the senior UN official to intervene so that this group withdraws from the area, the ambassador said.

Hilale stressed that "if the UN withdraws, Morocco would be entitled to take back the part of the Sahara that has been handed over to MINURSO."

He expressed the hope that the Security Council resolutions would convince the "polisario" group and Algeria to stop subjecting MINURSO to "unacceptable" blackmail.