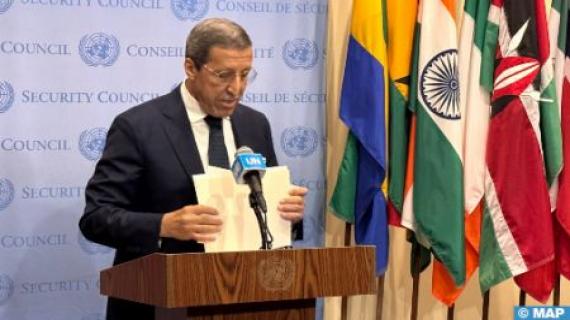 Responding to a question about allegations relating to the detainees of Gdim Izik, during his press conference following the adoption by the Security Council of resolution 2654 on the Moroccan Sahara, Hilale stressed that "all those who are paid by Algeria and housed in hotels in Algeria are fomenting campaigns of disinformation about these prisoners".

"These detainees have committed barbaric acts against the Moroccan forces of order. There were 11 dead and 158 injured, some of whom are still disabled for life," he said. He also recalled that these prisoners had the right to a "fair, transparent and clear" trial, in the presence of international and local observers and their lawyers. "They enjoy health care, television, landline and the right to study and receive family visits," he said, adding that they are not on hunger strike and that this information is conveyed to the outside world in order to put pressure on Morocco”.

Hilale noted that these detainees are treated in a "dignified and respectful manner because it is part of our principles and our international commitments," noting that Morocco "will never abandon its human, universal and humanistic values”.

The ambassador also stressed that the propaganda of these separatists "should not obscure the essence of their crimes and the victims who lost their lives. They were slaughtered and their bodies dehumanized,” indicating that the families of the victims are showing exemplary dignity and "do not want the politicization of this issue. They want the justice that has been done to be respected”.

In addition, and in response to another question on the challenge launched by Algeria to Morocco about the veracity of the recruitment of child soldiers in the Tindouf camps, Hilale replied that Morocco never shies away from the challenge of Algeria, explaining that its response to this challenge is at three levels:

First, Algeria, host country of the Tindouf camps and sole supporter of the armed separatist group, has not questioned the authenticity of these photos that prove without question the recruitment of these children on its own territory, he said, arguing that Algeria has tried in the past to challenge the veracity of these photos, "but it failed".

In this context, the ambassador recalled the case of Sultana Khaya who took pictures in military fatigues and Kalashnikov. Algeria has tried in vain to challenge the authenticity of this photo, however, the Special Rapporteur on human rights defenders has verified and proved the authenticity of this photo and decided accordingly to remove the name of this separatist from the list of persons to defend, said the ambassador.

Challenging the host country of the Tindouf camps on a second aspect of this humanitarian and human rights scandal, the Moroccan diplomat said that "if Algeria and the 'polisario' persist in denying the recruitment of children in these camps, they have only to invite Virginia Gamba, the Special Representative of the UN Secretary-General for Children and Armed Conflict, to visit the camps on condition that she speaks to these children and their parents face to face and without the presence” of the separatists.

Hilale issued a third challenge to Algeria, asking it to tell the international community how many children and schools there are in the camps, pointing out that this is impossible in the absence of a proper registration and census by the UN High Commissioner for Refugees. Something that Algeria has persisted in refusing for nearly half a century, he said.

Hilale concluded that Morocco will never cease to denounce the military recruitment of these children in the camps of Tindouf.