64 illegal migrants rescued at sea between Spain and Morocco 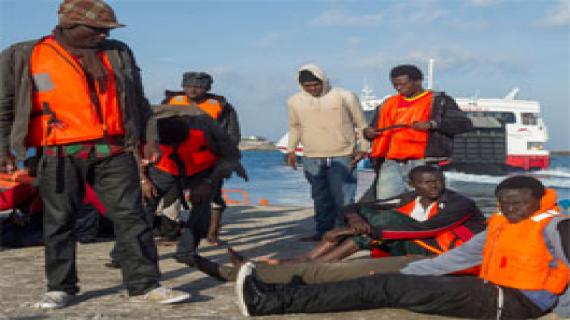 Spanish and Moroccan coastguards rescued 64 illegal migrants who were trying to reach the southern coast of Spain on inflatable boats, rescue services said.

That brings to around 300 the number of migrants who have been plucked to safety from such craft since Friday as they tried to cross the Strait of Gibraltar separating Spain from Morocco.

A spokesman for the Spanish Maritime Rescue said that a ship "rescued this morning 32 people in four boats in the Strait," while "the Moroccan authorities reported 32 people gathered on four boats that were transferred to Morocco".

Spanish interior ministry officials say the rise in the number of migrants trying to cross the Strait of Gibraltar is partly due to the end of the Islamic holy month of Ramadan on Thursday.

The Strait of Gibraltar separates Spain and Morocco by only 15 kilometres (nine miles) -- a ferry ride between the two continents takes roughly 35 minutes -- making it one of the key smuggling routes for illegal immigrants crossing into Europe.

Thousands of illegal migrants from Africa regularly attempt to cross from Morocco into Spain on makeshift boats each year.

Some travel thousands of miles overland, being handed from smuggler to smuggler, ending up at one of many ports in northern Africa for a cramped and treacherous sea crossing to  European soil.Last year, 3,804 immigrants reached Spain by sea according to government figures.