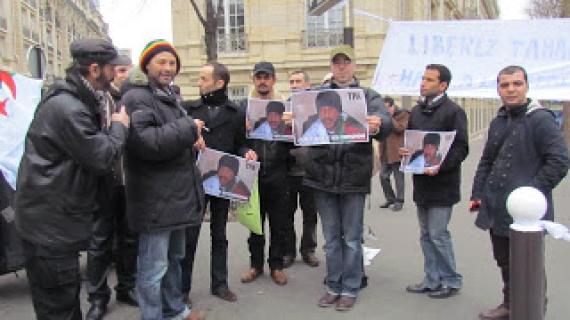 An Algerian court on Sunday sentenced to one month in jail an activist known for defending the rights of the unemployed on charges of holding “an unarmed gathering,” he told AFP.

Tahar Belabes, who is coordinator for the National Committee for the Rights of the Unemployed, also said he was fined 50,000 Algerian dinars (500 euros, 680 dollars) by the court in Ouargla, 800 kilometres (500 miles) south of Algiers.

Two other defendants, Khaled Daoui and Ali Khebchi, were tried with him and handed a two-month suspended jail sentence each, and also ordered to pay each a 50,000-dinar fine, he said, adding that two other activists were acquitted.

At their trial on January 20 the prosecutor had asked for a year in prison and 50,000 dinars as fine.

Belabes was arrested with four other activists in Ouargla on January 2 during a demonstration of unemployed people claiming their right to work.

Belabes said he will appeal the verdict.

The Algerian League for the Defence of Human Rights says that human rights in the country have not improved since the lifting of the state of emergency in February 2011. A dozen activists were prosecuted last year.