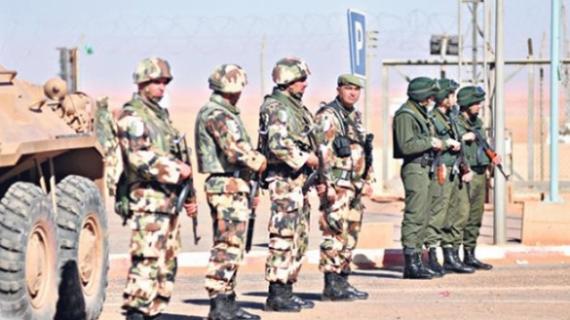 Nine Moroccan nationals were arrested on Saturday in Ouargla, central eastern Algeria, by the Algerian Army.

According to a statement issued by the Algerian Ministry of Defense cited by Tout sur l’Algérie news website on Sunday, the Moroccan nationals were labeled “illegal immigrants.”

The same source noted that one of them was allegedly carrying a hunting rifle and 307 cartridges.

Algerian authorities did not provide any further information concerning the final destination of the Moroccans arrested, whether they were just crossing Algeria or planning to remain within its borders.

Another group of Moroccan nationals was arrested on Saturday by the ANP off the coast of Tlemcen, in northwestern Algeria.

According to Arabic daily Al Khabar, Algerian authorities announced the arrest of 11 Moroccan nationals onboard a boat coming from Almeria, Spain, where they were reportedly not allowed to enter Spanish territory last Wednesday.

The daily revealed that the Moroccan suspects have been charged with “identity theft” for “forgery and use of forged identity and impersonation of others,” as they were allegedly carrying fake Algerian documents at the time of their arrest.

Algerian authorities have doubled the number of ANP troops and intelligence personnel at the Morocco-Algeria borderline.

“Securing the borders of Algeria with its western neighbor, Morocco, has been strengthened in recent days by the deployment of additional members of security forces, including elements of the National People’s Army,” the Algerian press said on Friday.

“The main objective of strengthening monitoring throughout the 1600 km separating Morocco from Algeria is to block the road to potential candidates for jihad in Libya who want to cross the country,” Arabic daily El Watan said.

On January 23, the Moroccan Ambassador to Algeria met with the Algerian Minister for Maghreb Affairs Abdelkader Messahel, in order to put an end to the alleged “massive and unusual influx of Moroccans to Algeria.”

Nearly 200 Moroccan nationals were turned back on January 24 at the Houari Boumediene Airport in Algiers after being detained on suspicion of wanting to reach Libya to join the so-called Islamic State terrorist organization.