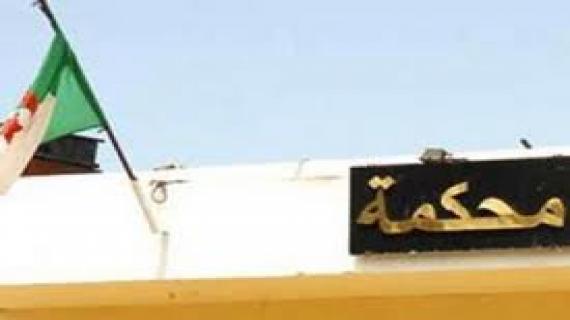 An Algerian court on Tuesday sentenced to jail four unemployed people on charges of “illegal gathering” after they held
a protest last month to demand jobs, while 13 others were acquitted, their lawyer said.

The four, who were also accused of using force against police, were sentenced each to one month in prison, lawyer Naima Saci told AFP after the verdict was announced at a court in Laghouat, southern Algeria.

“They were accused of illegal gathering and using force against police,” said Saci.

Farouk Slimani, a representative of the Algerian League for Human Rights, said he expected the four men, who have been jailed since their arrest on February 20, to be released from jail in the next few days.

The unemployed men were arrested after holding a protest outside the national employment agency in Laghouat.

The state prosecutor had requested tougher sentences of up to five years in jail for six of the protesters.

Another group of 15 unemployed men who staged a similar protest will be tried on March 26 on charges of “unarmed gathering.”

Algeria is plagued by a high rate of youth unemployment that affects 21.5 percent of those under 35, according to estimates from state agencies and the International Monetary Fund. Nationwide unemployment stands at 10 percent.

The situation is worse in south of the country, an underdeveloped region flooded by job seekers from the north.

On Monday Prime Minister Abdelmalek Sellal urged companies operating in the south to ensure that local job seekers be the priority recipients of employment in the region.