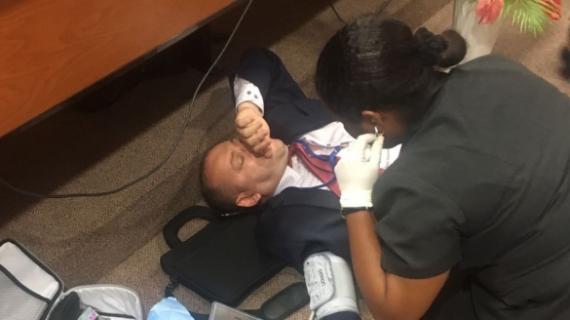 The same source states that the aggressor was, «Soufian Mimouni, Director General of the Algerian Ministry of Foreign Affairs”, adding that : «our diplomat has been sent to the hospital, the reunion was interrupted and a complaint was filed».

On the other hand, the Moroccan Minister of Foreign Affairs and International Cooperation has confirmed the incident.

«Violating the diplomatic rules and regulations  by one of the highest ranking officials in the Algerian Minister of Foreign Affairs is dangerous. Such extreme and aggressive behavior is infrequent in the history of diplomacy».

«It reflects the extreme anger of the Algerian diplomacy : It is surpriding to see that an Algerian representative attends Saint Lucia’s reunion and gets outraged by the recommendations of our representatives knowing that Algeria claims being simply an observer» of the Sahara, he indicated calling the neighboring country to «contribute to a solution and assume its responsibility regarding this case».