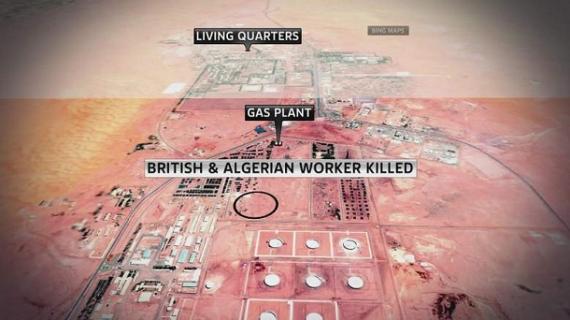 Irish man is understood to be among a number of hostages, who were being held by Islamist captors in the gas facility in eastern Algeria, to escape

At least six western hostages and eight Islamist militants were reported to have been killed today when Algerian army helicopters intervened in the siege at a BP-run gas plant in the Sahara desert.

A Mauritanian news agency, ANI, citing militants at the site, said the helicopters had strafed a bus trying to leave the gas plant near In Amenas which was captured by Al-Qaida-linked  insurgents yesterday.

The agency said earlier that as many as 35 hostages had died.

This was contradicted by a local source who told Reuters that six hostages died, 25 escaped and seven were still being held. As many as 150 Algerians hostages were also said to have escaped.

The Algerian authorities refused to make an immediate comment.

It emerged this evening that Britain was not informed in advance of the Algerian decision to stage a military intervention in the hostage crisis.

David Cameron was told that an operation was under way only when he telephoned the Algerian prime minister at 11.30am today, the Prime Minister's official spokesman said.

The Prime Minister made clear that he would have preferred to be informed in advance, but the Algerians said they had had to act "immediately".

"The Prime Minister is extremely concerned. It is a very grave and serious situation," the spokesman said.

Earlier, it was reported that 30 hostages – including some of the total of 41 foreign workers reported to be held – had managed to escape to safety.

This afternoon, Ireland's Department of Foreign Affairs said a 36-year-old man from west Belfast who had been held hostage had made contact with his family and was understood to be safe and free from captivity.

Stephen McFaul managed to contact his relatives twice before while in captivity.

But after receiving no further contact since yesterday, his family made a plea for his release earlier today.

They said they were very concerned about his welfare.

Just two-and-a-half hours later, he made contact with them to say he was free.

Several British workers were among the hostages, as well as Americans, Japanese, Norwegians and Frenchmen. One Briton and an Algerian guard were killed when the militant raided the gas pumping station near the Algeian-Libyan border yesterday morning.

The Mauritanian news agency, which has been in constant contact with the attackers,  said  Abou El Baraa, one of the leaders of the kidnappers, was killed in the helicopter attack.

The Nouakchott Information Agency  said that the raiders were attacked when they attempted to leave the BP-run complex.

About 30 militants failed to capture a bus containing foreign workers yesterday morning but seized the plant itself. They were surrounded overnight by powerful units of the Algerian army.

The attackers, believed to be a splinter group from the Al Qaida in the Islamic Magherb (AQIM) movement, asked for 100 Islamist prisoners to be released from Algerian jails.

They also asked for safe passage out of Algeria and an end to the week-old French intervention against Islamist rebels in Mali.

The Algerian government, which has a history of harsh reactions to hostage situations, said last night that there was no question of surrendering to these demands.

The British Foreign Office has confirmed that a military operation is under way at a gas facility.

Earlier, Foreign Secretary William Hague accused the attackers of “cold-blooded murder” and described the siege as a "dangerous and rapidly developing situation."

Mr Hague said he had dispatched a specialist response team to Algeria to back up Britain's embassy staff.

Speaking to the BBC Mr Hague said: "This is an absolute tragedy, of course. In this dangerous and rapidly developing situation the next of kin have been informed.

"The Government's Cobra emergency system is in full operation. I have spoken to our ambassador in Algeria and despatched a rapid deployment team to Algeria to strengthen our embassy there and help them in their work.

"Excuses being used by terrorists and murderers who are involved - there is no excuse for such behaviour, whatever excuse they may claim.

"It is absolutely unacceptable, of course. It is, in this case, the cold-blooded murder of people going about their business. So there is no excuse, whether it be connected to Libya, Mali or anywhere else."