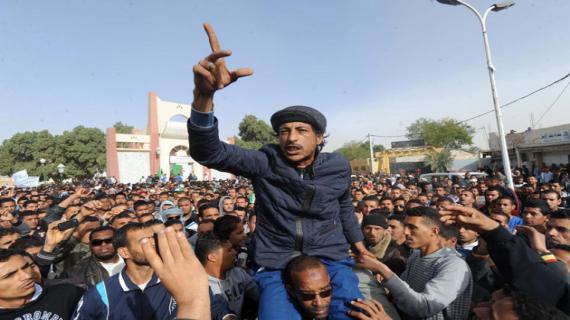 Algeria's vast, sparsely populated Sahara only holds 10 percent of the country's population but it is home to this North African country's enormous oil and gas reserves — the basis of the entire economy and the source of the government's power. Those who live there claim they aren't benefiting from that wealth, and can't get jobs with the oil companies.

Now al-Qaida has praised the protesters, raising the possibility that it is seeking support among the disaffected groups. The government is rushing to address the protesters' demands, but hasn't yet convinced them that it's serious.

Some 10,000 people — an enormous number for the lightly populated region —demonstrated on March 14 in Algeria's southern oil city of Ouargla, and thousands more later protested in another southern oil town, Laghouat.

"We want access to jobs in the oil companies, and not just the low-value ones like drivers and security guards; we want to be in the administration," Tahar Belabes, the head of the National Committee for Defense of the Rights of the Unemployed, which organized the demonstration, said by telephone from Ouargla.

"We just want the same employment possibilities. It's not normal that we live in the region where the oil and gas is located but don't benefit from it."

While youth unemployment is widespread in Algeria, and the rest of North Africa, the southerners say they are particularly discriminated against. There is also a widespread distrust of government officials, who are believed corrupt and skimming off the country's vast oil receipts.

Prime Minister Abdelmalek Sellal acknowledged on March 16 that the demonstrators' demands are legitimate and the government hurriedly announced a string of measures to address the perceived geographical bias in oil jobs. Oil companies will be obliged to give priority to job candidates from the south and recruitment must occur through registered employment agencies. The government announced that job-training centers would be set up to ready candidates for jobs with oil companies and hotels.

The demonstrations, however, have not stopped, and on Monday hundreds protested in the desert towns of Ghardaia and Oued Souf.

"The demonstrations are continuing because the young unemployed don't believe in official promises and they don't trust the local government representatives or their parliamentarians — they want to negotiate directly with the government," said Kamal Zaidi, a member of an unemployed group in Laghouat and a human rights activist.

Most worrying for the government is that, on Friday, Al-Qaida's North African branch expressed solidarity with the demonstrations, slamming what they say is the corrupt use of the country's resources.

"The events of the south and the call of the people to protest in the streets is the natural response to the policy of marginalization and nepotism used by the corrupt Algerian regime," said the message posted on extremist websites.

Al-Qaida's signature tactic around the world has been to find marginalized groups in remote areas and espouse their cause, much the way they did with the disenfranchised Tuareg tribesmen in northern Mali, setting up a foothold that later became a de facto state before they were routed by the French in February.

In January, an al-Qaida-linked group for the first time attacked one of the country's remote desert gas plants.

While the leaders of Al-Qaida's Algerian branch are predominantly from the populous north, the leader of the attack on the Ain Amenas gas complex in January that left 37 hostages dead was a southerner — Lamine Bencheneb, part of the radical Sons of Sahara armed Islamic group.

In the attack, the multinational team of militants appeared to know the complex inside and out, sparking reports that they may have had allies among the site's local drivers who had gone on strike over low pay just weeks earlier.

Geoff Porter, a veteran Algeria analyst with the North Africa Risk Consulting firm said the "unevenness" of past government investment programs have left a legacy of distrust in the south — a region that also lacks the educational opportunities to produce the necessary skills for oil sector jobs.

Part of the problem, he added, is that the hydrocarbon industries don't require very much employment and there is little else going in these remote communities after the desert tourism industry dried up.

In attempt to curb the recent demonstrations, the government sent local parliamentarians, mostly from the ruling party, back to their towns in the south to hold meetings, but most of these were boycotted by the committees of the unemployed.

"The Algerian state has always had a policy of national investment and a great deal of money has been invested in the south, just like the other regions," said Mohammed Dhimi, one of the members of parliament from the south. "Perhaps the investments were not well thought-out or misdirected or didn't respond to the agricultural and industrial needs of the people."

"The protesters may sense that they have built up some momentum and that they are going to continue their protests until they see meaningful steps taken to deliver on the prime minister's promises," he said.

Belabes, the head of the unemployment committee, promised a new round of demonstrations in the coming days.

Associated Press/Nabil Zahani - In this photo dated March 14, 2013, protesters gestures during a demonstration by thousands of young unemployed men demanding jobs in the oil industry in Algeria’s southern city …more