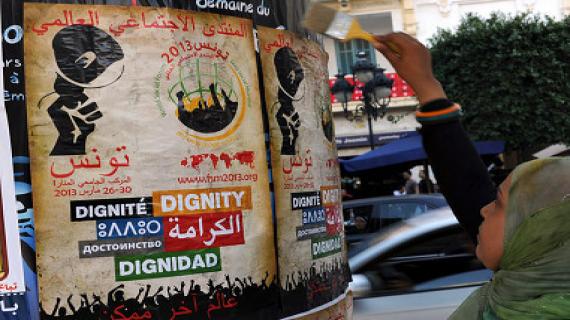 Algerian authorities illegally restricted rights to free movement when they barred 96 Algerian civil society activists from travelling to Tunisia, without giving any reason. Border officials stopped the activists on March 25 as they were about to enter Tunisia, where they intended to attend the World Social Forum. The forum, a global gathering of approximately 50,000 activists on areas such as human rights and the environment, runs from March 26 to March 30, 2013.

The Algerian activists included members of the Algerian League for Human Rights, the National Autonomous Union of Public Administration Staff (Syndicat National Autonome des personnels de l’administration publique, SNAPAP), SOS disparus, and other non-governmental organizations. Officials would not let them through when they arrived at the Layoun border crossing at 3 a.m., and after a delay of three hours, police told them they were not permitted to cross the border.

“The Algerian authorities are disrupting the legitimate activities of local human rights and civil society activists, as they have so many times before,” said Eric Goldstein, deputy Middle East and North Africa director at Human Rights Watch. “It is high time they end their campaign of harassment and intimidation of reform advocates, and observe their obligations under international law.”

Mourad Tchiko, a member of the national bureau of SNAPAP and one of the designated leaders of the Algerian delegation to the WSF, told Human Rights Watch that police did not explain why the authorities had decided not to allow the activists to cross into Tunisia. They said only “that they have instructions,” Tchiko said.

This latest incident follows the arrest and summary expulsion of 10 foreign nationals from the associations of unemployed workers of the Maghreb on February 20. They travelled to Algiers to attend the first Maghreb Forum for the Fight Against Unemployment and Temporary Work (Forum maghrébin pour la lutte contre le chômage et le travail précaire) on February 20-21, at the Labour Union Centre (Maison des syndicats) in Algiers. Instead, police held them – five Tunisians, three Mauritanians and two Moroccans – at the local police station for several hours before taking them to the airport and expelling them. Police also detained two Algerians, Abdelkader Kherba, amember of the National Committee for the rights of the unemployed (CNDDC), and Tchiko, all day, before releasing them without charge that night.

The International Covenant on Civil and Political Rights, and the African Charter on Human and Peoples’ Rights, both ratified by Algeria, state that everyone has the right to leave any country, including their own. The UN Human Rights Committee, which provides the definitive interpretation of the covenant, has stated it is normally a human rights violation to restrict the freedom of those who wish to travel outside a state to attend a human rights-related meeting.

“It is outrageous that Algerian authorities have barred these activists from travelling to Tunisia to attend the World Social Forum,” Goldstein said. “They should think again and allow the Algerian activists to travel to Tunisia without prevarication or delay.”