Anniversary of Algeria’s revolution: no congratulatory message from Morocco’s King to Abdelaziz Bouteflika 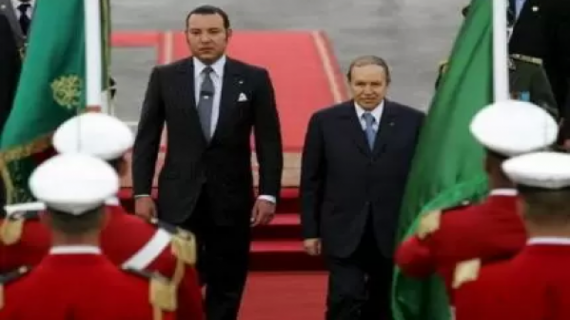 In what can be considered an unprecedented move in the relations between Morocco and Algeria, King Mohammed VI abstained from sending a congratulatory message to Algeria’s President Abdelaziz Bouteflika on the occasion of the 59th anniversary of the Algerian revolution against French colonialism.

This move comes against the background of the deterioration of the relations between the two neighbors in recent days, especially after Algerian authorities made a number of statements regarding the question of the Sahara, which were considered by Morocco as “provocative.”

The latest of these statements is the one read on behalf by Algerian President, Abdelaziz Bouteflika, on Monday in Abuja. In his statement, the ailing Algerian head of state called for the establishment of a human monitoring mechanism in the Sahara, adding that this mechanism is “needed more than ever before.”

This statement caused the ire of Rabat, who moved to recall its Ambassador in Algiers for consultations.

This decision follows the increase in acts of provocation and hostility of Algeria against the Kingdom, particularly with regard to the regional dispute over the Moroccan Sahara, reads the statement.

“More specifically, the hostile message sent on October 28 by the Algerian President to a meeting in Abuja against Morocco illustrates this deliberate escalation and confirms this approach, which consists in maintaining the status quo,” adds the statement.

“The deliberately provocative content and inherently aggressive of this message, which emanates from the highest authority of the country, clearly reflects the position of Algeria as a party to the dispute and unequivocally reveals its true strategy based on the political manipulation of the noble cause of human rights,” said the statement of the Moroccan Ministry of Foreign Affairs.