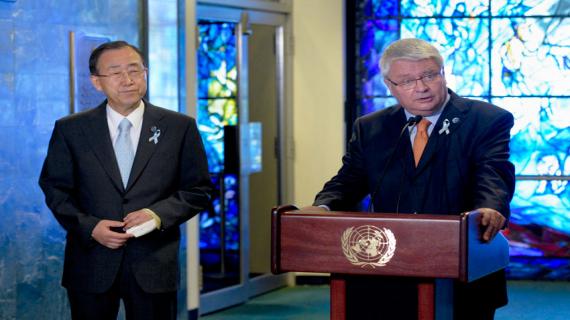 UN Assistant Secretary General in charge of peacekeeping operations, Hervé Ladsus, is expected to conduct a North Africa tour this October 20 to 25, in an attempt to defuse the crisis over the Moroccan border post of Guerguarate.

The experienced French diplomat Hervé Ladsus will visit the region instead of Christopher Ross, the Personal Envoy of the UN Secretary-General Ban Ki-Moon, who will be replaced as of January 1, 2017 by former Portuguese Prime Minister Antonio Guteress.

The UN Assistant Secretary General in charge of peacekeeping operations will try to defuse the tension between Morocco, the Polisario and Algeria, and bring out of the deadlock talks on the Western Sahara issue. The talks have virtually been stalled since 2013 and have not made any noticeable progress since the appointment of Ross in January 2009.

The UN official’s mission will not be easy as it takes place in a tense context because of the deployment of armed elements of the Polisario in the buffer zone, not far from the Moroccan border post of Guergarate and at only some 120 meters from the Moroccan security forces’ positions.

The Polisario elements were rushed to the scene, supposedly to “stop” the construction by the Moroccan civil engineering of a 4 km-long stretch of a road between the extreme southwest of the Moroccan Sahara and northern Mauritania.

The lack of progress in the political settlement of the territorial dispute opposing Morocco to Algeria, through the Polisario, will not help the French diplomat Hervé Ladsus in his mission.

Moreover, the Polisario’s stubbornness to maintain its armed militia in the buffer zone, although 90 % of the asphalting works have been completed, complicates the situation and exacerbates relations between Morocco on the one hand and the UN and MINURSO, on the other.

The Polisario leaders, who reject the Moroccan proposal to grant to the Sahara provinces a large autonomy and who continue to cling to the obsolete and unfeasible “self-determination referendum” are actually serving the Algerian regime’s hegemony aims. Algeria perpetuates the regional conflict to impose its leadership in the region and why not afford a corridor to the Atlantic coast to facilitate the exportation of its hydrocarbons.

Everybody, including the Polisario, needs to realize that the interests of the Sahrawis, held against their will in the Tindouf camps, are the least of the concerns of Algerian rulers and generals.