Associations Campaigning in Spain in Favor of Autonomy Plan 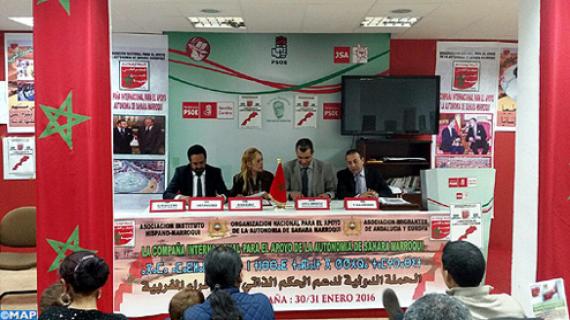 An international campaign of support to the Moroccan autonomy proposal for the Sahara was launched on Saturday in the Spanish city of Seville, at the initiative of a collective of Spain-based Moroccan associations.

The autonomy plan was proposed by Morocco in April 2007, in a bid to settle the Western Sahara territorial dispute poisoning inter-Maghreb relations.

The Moroccan associations have decided to launch their campaign from the city of Seville, where some civil society activists are still supporting the Polisario and its separatist thesis.

This initiative aims to inform residents, local leaders and associations of Andalusia about the ins and outs of the Moroccan autonomy proposal for the Sahara.

The Collective includes the National Network of Support to the Autonomy of the Moroccan Sahara, the Spanish-Moroccan Institute, the Association of Migrants in Andalusia and Europe, the Federation of Moroccan-Spanish Associations of Barcelona and the Association of Sahrawis without Borders.

In addresses during the campaign launch ceremony, held at the headquarters of the Spanish Socialist Workers Party (PSOE) in Seville, the leaders of these associations explained that their initiative seeks to garner more support to Morocco’s position in Spain and particularly in the region of Andalusia.

The initiative also provides an opportunity for Moroccans settled in Spain to explain the merits of the Moroccan proposal as the only viable solution to the Sahara conflict and to recall that the international community has described the proposal as “serious and credible,” they said.

The associations leaders surveyed the huge economic and social development projects initiated in the southern provinces of the Kingdom and pointed out that the advanced regionalization process Morocco has embarked on will enable the Sahrawis to manage their local affairs through democratically-elected legislative bodies.

The campaign launch ceremony was attended by several Spanish politicians and leaders of Spanish associations supporting Western Sahara as a Moroccan territory.