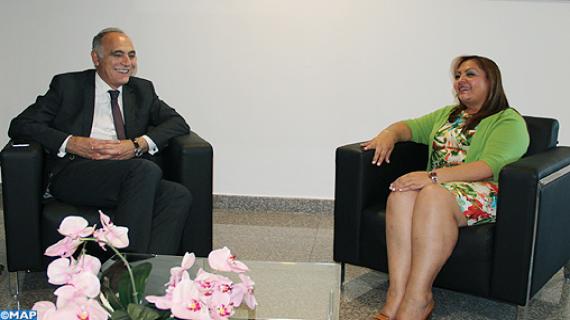 The autonomy plan proposed by Morocco to reach a final settlement of the Sahara issue, will ensure stability and contribute to the prosperity of the region, said here on Monday, the chairwoman of foreign relations committee at the National Assembly of Panama, Dana Castaneda.

The implementation of this "important" autonomy plan will enable Morocco to exercise its sovereignty over its southern provinces, which will help create a dynamic that ensures economic development and stability for the people of the region, she told MAP following talks with Morocco's Foreign Affairs minister, Salaheddine Mezouar, who is on an official visit to Panama.

The Panamanian official, who has visited Morocco's southern provinces, hailed the economic development and the dynamic witnessed by Morocco in general, and the Sahara region in particular, in recent years, noting that Moroccan women strengthened their presence in the country's political and economic landscape.

"I believe that Morocco is engaged in a process of development and progress, while its people enjoy democracy and prosperity," she said, adding that bilateral relations will be consolidated after the opening of an embassy by Morocco, a "friendly country", and the setting up of friendship groups at the Moroccan and Panamanian legislative institutions.

During the talks, Mezouar highlighted the ongoing deep reforms in Morocco as well as its dynamic development, saying that the kingdom endeavors to strengthen its relations with third world countries in the framework of South-South partnership.

"We are laying the foundation for a better relationship between the parliaments of Morocco and Panama," De Leon told MAP at the end of the talks.

Morocco's foreign affairs minister had also talks with the Panamanian Environment minister, Mirei Endara, focused on ways to enhance cooperation and coordination between the two countries.

During the meeting, Mezouar highlighted efforts made by Morocco to invest in green economy, citing in this regard projects initiated by the kingdom in the field of renewable energy.