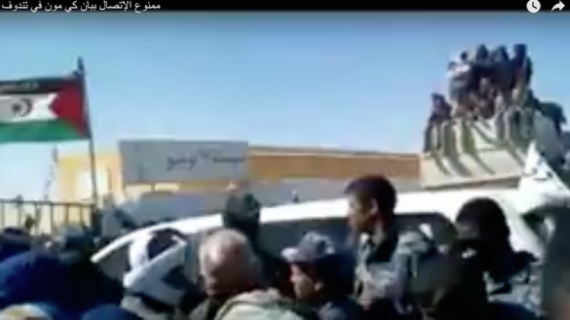 Serious incidents have occurred during the visit of the UN Secretary General to the camps of Tindouf. In the camp of Smara, the motorcade of Ban Ki-moon was hit by stones forcing him to abscond on a helicopter.

All has not gone well during the visit of Ban Ki-moon to the camps of Tindouf in the South of Algeria, contrarily to what the separatist’s propaganda is trying to depict.

The UN Secretary General has finally understood what was meant by the “ENOUGH” of the Sahrawi youth, which he evoked himself during his trip to the Algerian deathtrap.

Yesterday (Saturday), while arriving in Smara Camp, from the Tindouf airport, on board of a UN helicopter, Ban Ki-moon, which was heading, in a motorcade, towards the school “June 17”, where he had to meet with a group of youth carefully selected by the polisario Directorate, saw himself forced to turn back.

The reason is the anarchy caused by the youth that wanted to hand in a letter claiming the status of « Refugees », Le360 learned from well informed sources.

Furthermore, the Sahrawis originally from the Souaâd fraction (Rguibat tribe), have ultimately attacked the UN Secretary General by stone-throwing at his motorcade after a MINURSO vehicle hit one their cousins.

Moreover, at the time that the motorcade of Ban Ki-Moon was passing by, a young person from the Sahrawi camps, who has already tried on the 4th of March to hand in to the officials of the bureau of the HRC in Tindouf a letter to the UN Secretary General, has attempted to reach the car of the latter in order to give him the letter. It was taken badly: he was violently moved away by the militias of the Polisario.