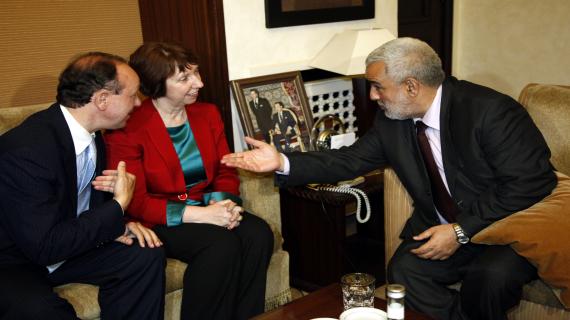 Head of government Abdelilah Benkirane met with Algerian Foreign Minister Mourad Medelci on the sidelines of the conference of donors for development in Mali held in Brussels on Wednesday.

Benkirane said to MAP that he seized the opportunity of this “friendly meeting” to convey to the Algerian foreign minister the greetings and wishes of good recovery from HM King Mohammed VI to Algerian president Abdelaziz Bouteflika.

Medelci said he also conveyed to the Moroccan official a message from Algerian President to HM King Mohammed VI who “was concerned about the health of Bouteflika.”

End of April, the Algerian president was transferred to a Paris hospital after suffering transient ischemia .

The head of the Algerian diplomacy also indicated that these meetings were an opportunity to renew the two governments’ will to carry on efforts for the consolidation and improvement of bilateral relations.

He added that the discussions also focused on security in the Sahel and the importance of mobilizing the international community to help countries in the region in a coherent and comprehensive manner.

Ten Heads of State and Government as well as hundreds of delegations are taking part in the Brussels donor conference aiming at mobilizing and coordinating the support of the international community for development in Mal.