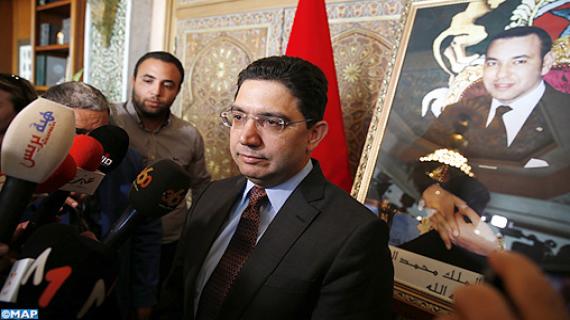 The autonomy initiative, presented by Morocco in 2007, was further strengthened by resolution 2351, adopted unanimously by the members of the UN Security Council (UNSC), said ,Saturday, minister of Foreign Affairs and International Cooperation, Nasser Bourita.

In this resolution, the Security Council takes note once again of the Moroccan proposal by welcoming the "serious and credible" efforts made by the Kingdom to move forward towards a final settlement of the artificial conflict over the Moroccan Sahara , Bourita said during a meeting with the press in Rabat.

"The resolution of the Security Council is very clear on this subject in the sense that there is a momentum created since 2007 and which is now a reference and a basis of work for the United Nations on this issue," said the Moroccan official.

He added that thanks to the actions carried out by HM King Mohammed VI, Morocco has contributed greatly to the creation of the atmosphere of serenity in which the debates took place within the Security Council.

The new resolution stresses the regional dimension of the conflict over the issue of the Moroccan Sahara, by calling on neighboring countries to clearly cooperate with the UN and to become more involved in order to end the current impasse and make progress towards a political solution, Bourita went on to say.

Therefore, the Security Council joins the call of the UN Secretary-General by stressing the fact that "Algeria and Mauritania can and should lend an important support for this process", noted Bourita, adding that this is a "new fact" in the UN resolution.

It is no longer an "optional or voluntary contribution" but an "obligation to get involved in the search" for a definitive solution to this artificial conflict, the minister said.

Despite attempts by the other parties to deviate attention from the political process, seeking in vain to raise, as in recent years, a debate on human rights, natural resources and the mandate of the Minurso, the Security Council proved once again that it is aware that the political process remains the key to any solution to this artificial conflict, he added.

Bourita also welcomed Washington's position, reaffirmed by the new US administration, on the Moroccan proposal for autonomy, which was described as "serious, credible and realistic", while stressing that it represents a "potential approach to meet the aspirations of the population of the Sahara to manage their own affairs in peace and dignity.”

The same position was reiterated very clearly by France and Senegal, added the minister, noting that "three countries from three continents agreed on this proposal for autonomy."