Bouteflika to Christopher Ross: 'I want the solution of Hassan II for the Sahara' 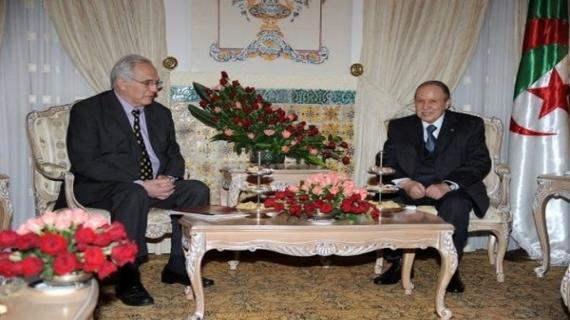 Algiers: Algerian president declared infront of the UN envoy that Algeria would not object to a full integration of the Sahrawis of Tindouf in Morocco.

"We want the best solution to the Sahara issue, one invented years ago by the late King Hassan II."

Thus the Algerian President Abdelaziz Bouteflika declared to the Personal Envoy of the Secretary General of the United Nations in the Sahara, Christopher Ross, during the audience granted him at the presidential residence in Algiers.

According to the weekly Ma Waraa Al Hadath, President Bouteflika supported infront of Ross the idea that Algeria would respect any solution provided it is stopped, recognised and sealed at the UN.

"Algeria does not oppose a full integration of Sahrawis in the Tindouf camps in Morocco, but it must go through the UN" proclaimed the source, Bouteflika called for a referendum in the Sahara Hassanian ( a reference to Hassan II), which will question the voters on three routes: the union with Morocco, greater autonomy or separation, and to settle the matter.

The statements of the Algerian president were reproduced by Foreign Minister Mourad Medelci during a press conference with Ross repeating that Algeria would not interfere to prevent the inclusion of prisoners of Tindouf in Morocco.