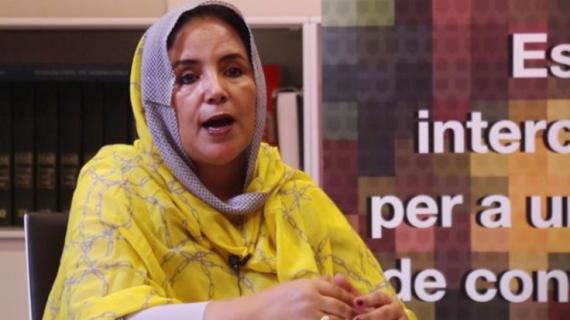 The Polisario tasked Khadijatou El Mokhtar, in charge of international relations in the so-called National Union of Sahrawi Women, to defend Spanish Catalans’ right to independence.

Khadijatou El Mokhtar, who was expelled last September from Peru for identity fraud as she claimed to be a so-called ambassador for the pseudo-SADR in Lima, expressed the Polisario’s support to Catalan separatists. This backing appears as a retaliation for Madrid’s pro-Moroccan stance in the Western Sahara issue.

In a video broadcast in Spanish on YouTube, Khadijatou El Mokhtar, holder of a Spanish passport, welcomed the situation “Spain is experiencing following the outbreak of the secessionist process – although it threatens the territorial integrity of the Iberian kingdom – and affirmed that “this situation will have a positive impact on the cause of the Sahrawi people”.

The Polisario’s position in favor of the independence of Catalonia can also be explained by the support that many Catalan leaders have shown to the theses of the separatist movement.

The stand expressed by Khadijatou is however in total contradiction with that expressed two days ago by the Algerian government, the godfather of Polisario. Algeria “reiterates its commitment to the integrity and unity of the Kingdom of Spain,” the spokesperson for the Algerian Foreign Ministry, Abdelaziz Benali Cherif, had said.

Benali Cherif insisted that Algeria “is bound to Spain by a Treaty of friendship, neighborliness and cooperation and by outstanding traditional relations, underpinned by a high-level political dialogue and substantial economic cooperation”. Algeria “has full confidence in the capacity of the Spanish people and Spanish authorities to overcome the current situation and to resolve the crisis in conformity with the Constitution and the democratic institutions of the Kingdom of Spain”.

By expressing its solidarity with the Catalan separatists, the Polisario has alienated the whole international community and particularly the European Union members, which have distanced themselves from the unilateral proclamation of independence of the Autonomous Region of Catalonia.