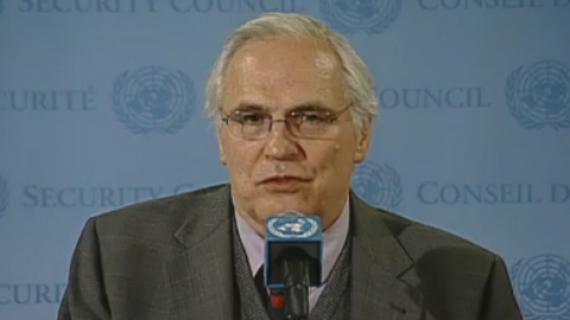 The United Secretary General’s Personal Envoy to the Sahara, Christopher Ross, on Wednesday briefed the UN Security Council on his visit to North Africa from October 25 to November 11.

In a statement he delivered to the press following the briefing, which was held in closed meeting of the Security Council, the American diplomat thanked Morocco for the full cooperation it extended to him. “Everywhere my welcome was warm and without reservation,” he said in the press statement which was obtained by Morocco World News.

As during his visit to the region, Ross pointed out that the situation in the region remains of great concern, and called on the international community to shoulder its responsibility in finding a political, long-lasting and mutually acceptable solution to the conflict.

“The situation remains very worrisome and should remain on the radar of the international community, he said, adding that the “conflict over the final status of Western has gone on for far too long”.

He further called on the parties to the conflict and other stakeholders to move beyond the current deadlock of the negotiations, adding that it is a “miscalculation” to think that the status quo is stable, especially in light of the threats that hover on North Africa and the Sahel region.

“While some believe that the status quo is stable and that is risky to take the chances for peace, I believe that this is a serious miscalculation , particularly now that the region is threatened by extremist, terrorist and criminal elements operating in the Sahel.”

He went to show his optimism that the conflict can be resolved if “there is a will to engage in real dialogue and compromise,” while expressing his fear that if the conflict is left to fester, it could “feed growing frustration and spark renewed violence or hostilities that would be tragic for the region.”

With regards to the way forward, he admitted the failure of the nine rounds of informal talks held since August 2009 in helping to advance the search for a solution. He said that he would, instead, focus on additional consultations with key international stakeholders c and then engage in “shuttle diplomacy” with the parties and neighboring states in the context of one more one of more visits to the region, including to the Sahara.

Asked by a reporter to give him an assessment regarding the reports on the alleged violence on demonstrators in the Sahara, while he was in the region, he said that while he received reports on incidents of violence, none of these incidents happened during his presence in the region. I “personally saw no such activity. I received report of demonstration, of police actions of incidents of violence during my visit to Western Sahara and thereafter. None of these reports and events occurred during my presence, so I am not in a position to give you a first-hand assessment,” Ross said.

He went on to say that “there are reports of alleged violence on both sides,” but it “is up to the Security Council and to the High Commissioner of Human right to determine whether this information is so serious to warrant close international attention.” “I live this matter entirely in the hands of the Council and in the hands of the High Commissioner for Human Rights,” he added.

He said Morocco wanted negotiations that lead to a “realistic” solution but also stressed Morocco’s “generous” offer of autonomy.