The decision of Morocco to sever its diplomatic relations with Iran matches the gravity of acts by Hezbollah, which is supported by this country and threatens the security of the Kingdom, said Foreign Minister Nasser Bourita, assuring that Morocco, which has irrefutable evidence, would not have bothered to submit a file to Tehran if it was not solid.

"The file was carefully prepared, for weeks, on the basis of information collected and cross-checked over several months. It summarizes proven and precise facts: dates of visits by senior officers of Hezbollah in Algeria, dates and venues of meetings with Polisario officials, list of names of agents involved in these contacts," he said in an interview with weekly "Jeune Afrique", noting that Morocco did not take its decision until all elements have been studied, verified and confirmed.

The minister said he has revealed to his Iranian counterpart the names of senior Hezbollah officers who have travelled on various occasions to Tindouf since March 2017 to meet Polisario leaders, and even supervised training sessions and building of facilities.

Bourita also said that the Iranian embassy in Algiers was linking Hezbollah, Algeria and Polisario, through its "cultural advisor" Amir Moussawi.

Moussawi, who has already been a key figure in the attempt to spread Shia Islam in several Arab and African countries, is now the advisor of strategic issues to "Supreme Leader" Ali Khamenei, he explained.

The minister also noted that, in addition to its blessing, Algeria has covered these acts and provided operational support, stating that some meetings between the Polisario and Hezbollah have been held in an Algerian "hideout" which is well known to Algerian services, granted to a woman named "D.B.", an Algerian married to a Hezbollah officer and converted into a Hezbollah liaison officer, notably with the Polisario.

None of the names or facts presented have been questioned by the Iranian Foreign Minister, he underlined. 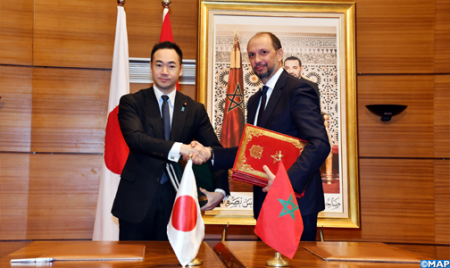