DEFEATED ISLAMISTS REGROUP IN MALI & ABROAD, SOME IN CAMPS RUN BY POLISARIO 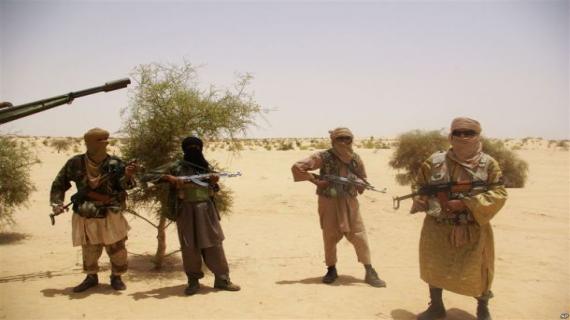 Ousted from their major northern strongholds by a French-led military intervention and all but defeated in their mountain hideouts, Mali’s Islamist militants are beginning to regroup at home and abroad.

French and African soldiers have inflicted heavy losses since launching a military operation on January 11 to block the advance of Al Qaeda-linked insurgents on the capital Bamako, with Paris claiming to have killed 400 rebels.

But dozens have fled Mali over the mountains of northern Niger and Chad, passing into southern Libya and western Sudan, where they are reorganising, military sources said, while others are recuperating in Algeria.

He said members of the Movement for Oneness and Jihad in West Africa (MUJAO), one of three Islamist militias which occupied northern Mali last year, had gone into the Algerian camps of the Polisario Front, a rebel movement demanding the end of Moroccan control in the disputed territory of Western Sahara.

“Recently, when the highest UN au

thorities have expressed their concern and called for urgent settlement of the Western Sahara problem, it is because of the risk of terrorists turning the refugee camps into a new home for jihadists,” the African soldier said.

United Nations Secretary-General Ban Ki-moon said in a report to the Security Council in early April that governments in the region had “raised serious concerns about the risk that the fighting in Mali could have an impact in neighbouring countries and in helping to radicalize the refugee camps of the Western Sahara” which he described as “a ticking time bomb.”

Ousmane Maiga, of the “Youth Coordination Association” in Gao, Mali’s largest northern city, said small groups of Islamists had headed not just into Algeria but also into Mali’s neighbours Niger and Mauritania.

“Now the fear is that we will see them coming back into northern Mali to take up arms again,” he said.

But not all members of MUJAO and the two other main armed Islamist groups in Mali, Al-Qaeda in the Islamic Maghreb (AQIM) and Ansar Dine (Defenders of the Faith), have fled abroad.

“The enemy is still on the ground,” said a member of the general staff of the Malian army, pointing to suicide bombings in the cities of Gao, Timbuktu and Kidal as well as the lengthy engagement of Islamist fighters by French and Chadian troops in the northeastern Ifoghas mountains.

Many of the militants have abandoned their weapons to enable them to move more easily, but have an efficient supply chain which could resupply them at a moment’s notice, a Malian colonel said.

After the death of one of its main leaders, Abu Zeid, in the Ifoghas, AQIM is trying to regain control in north-western Mali “under the leadership of the Algerian Abu Yeyia Hamame, chief of AQIM in the Sahara and northern Mali”, according to a confidential military document.

The document goes on to say that a Malian ethnic Touareg named Abdelkrim Taleb has organised a “resistance” in the north-east, around Gao and Kidal.

Regional security and military sources interviewed by AFP described the French army as “the backbone of security in northern Mali” but France has begun a phased withdrawal of its 4,000 soldiers, with all but 1,000 expected to have left by the end of the year.

Chadian President Idriss Deby, who sent 2,000 troops to Mali, announced on Sunday that the country’s forces would be staging their own withdrawal ahead of schedule.

“The face-to-face war with jihadists is finished. The Chadian army has no real competence to cope with a nebula. Chadian soldiers will return to Chad. They have completed their mission,” he said, without giving specifics.

According to military and security sources, “it is feared that Islamists have set foot back in these areas to give new impetus to their terrorist actions”.